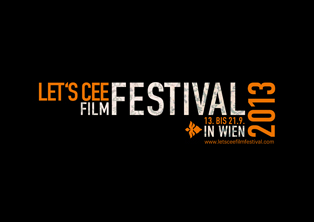 During the second instalment of the LET’S CEE Film Festival, a selection of around 50 extraordinary films from Central and Eastern Europe will be presented over a period of nine days, starting on September 13th. The organizers’ guest list features such prominent names as Academy Award winners Branko Lustig, Allan Starski and Istvan Szabo, as well as Russian virtuoso film director Alexander Sokurov. The festival still does not receive a single cent of support from neither the city of Vienna, nor the Federal Ministry for Education, Arts and Culture.

“We are starting on September 13th, on a Friday that marks the International Positive Thinking Day. That’s a perfect match – positive thinking is our distinguishing feature.” Magdalena Zelasko was born in Poland and lives in Vienna; the founder and director of the LET’S CEE Film Festival has not yet lost her optimism, despite there being plenty of reasons: Despite of a month-long odyssey that took her to various politicians and government offices, her festival will not receive any financial support for the second year running, neither from the city of Vienna, nor from the Federal Ministry for Education, Arts and Culture (BMUKK).

Nonetheless, Zelasko and her team, which consists entirely of volunteers, managed to put together an impressive line-up for this year’s iteration of the festival. The LET’S CEE Film Festival 2013 will present some 40 of the best feature films and documentaries from Central and Eastern Europe in the Wiener Urania and Actors Studio cinemas, many of which will be Austrian premieres featured as part of a Feature Film Competition and a Documentary Film Competition, as was the case last year. In addition to that, this year’s festival will also feature a Short Film Competition, the underlying theme of which will be the civil society. Most of the featured productions will again be presented in their original versions with German or English subtitles, while some will be available in dubbed versions for the first time.

The festival’s opening film will be Daria Onyshchenko’s drama Eastalgia, a Serbian-German-Ukrainian co-production starring Austrian actors Karl Markovics and Georg Friedrich in the leading roles. “Productions such as this one, which brought together a team of people from half of the CEE region, have become a trademark of sorts for our festival”, says Magdalena Zelasko, explaining her choice of that film. The Feature Film Competition, curated by Poland’s best-known film critic Tomasz Raczek, will include eight films, among them Istvan Szabo’s most recent work The Door (starring Helen Mirren and Martina Gedeck), Domestic by Adrian Sitaru, Circles by Srdan Golubovic, Jin by Reha Erdem and In the Name of by Magloska Szumowska. The Short Film Competition, curated by film directors Arash and Arman Riahi, will feature seven participants and the Documentary Film Competition, supervised by Croatian-born filmmaker Rada Sesic who now lives in Utrecht, will feature six contributions. Two retrospectives, one night line, several highlights (such as the probably most famous silent movie of all time, Battleship Potemkin, accompanied live by the band Russkaja), a country focus on Poland and several other film series will complete the film programme.

Just like last year, the organisers of the LET’S CEE Film Festival have tried to bring at least one special guest per film. Those guests will then be available to the audience for questions during Q&A sessions after each film screening. The names of those who have already confirmed their visit to Vienna sound like a list of the elite Central and Eastern European filmmakers. Several Academy Award winners will be paying a visit to the festival: Croatian producer Branko Lustig, who will come all the way from Zagreb to attend the screening of his masterpiece Schindler’s List, Polish set designer Allan Starski and Hungarian film director Istvan Szabo. There will be two retrospectives, one of which will be dedicated to Slovenian director Damjan Kozole, and the other to Russian virtuoso film director Alexander Sokurov, whose version of Faust was awarded the Golden Lion at the Venice Film Festival.

A new element in the festival programme will be the Master Classes, most of which will be held in close cooperation with the renowned Andrzej Wajda School in Warsaw, which will allow young filmmakers a close look at the work of some of the filmmaking scene’s greatest for a very modest fee. Among the legends who will be holding the Master Classes are Allan Starski, Alexander Sokurov and Damjan Kozole, as well as the co-founder and programme director of the Wajda School, director and winner of the Silver Bear Wojciech Marczewski, legendary Bosnian musician and film score composer Sasa Losic, as well as producer and film director Blerta Zequiri, winner of multiple awards at several prestigious festivals, such as the Sundance Film Festival. There will also be a School Cinema (price: 5 Euros per ticket) which will be showing three films: Schindler’s List (the screening of which will be attended by its producer Branko Lustig who himself was interned in a concentration camp as a child), the children’s films Buta from Azerbaijan and the Lithuanian documentary How We Played the Revolution.

Christof Papousek, CFO of the Constantin Film Holding GmbH and of the Cineplexx International GmbH, the festival’s strategic partner for the second time runnung: “Our group has been active in many CEE countries for several years. Thus showing good films from that region here in Vienna seemed to us like an idea worth supporting and of course we will also support the second instalment with the highest commitment.” Film producer and culture manager Robert Hofferer, who is currently producing a new edition of Andre Heller’s legendary circus show Afrika! Afrika! for theatres, as well as a new film project in Slovenia together with ARTDELUXE, will remain as the LET’S CEE Film Festival’s award sponsor. Hofferer: “The LET’S CEE Film Festival is a committed, ambitious festival and it deserves all the support that public and private sponsors and the media can give. The festival enriches the cultural life of Vienna as a cosmopolitan city in a most refreshing and innovative way; being the pivot of an energetic, mindful and visionary perception of the contemporary filmmaking scene in Central and Eastern Europe, it defines an entire coordinate system of creative and economic dimensions.” It is still debatable whether the support by Cineplexx International GmbH and Artdeluxe GmbH, combined with the support from several other sponsors from the commercial sector (such as the Vienna Chamber of Commerce, Raiffeisen Bank International or Vienna International Hotelmanagement) as well as several foreign embassies and cultural institutions, will be sufficient to guarantee the survival of the festival in the long term.

Wolfgang P. Schwelle, deputy director at the LET’S CEE Film Festival: “As far as the cultural needs of film enthusiasts and migrants are concerned, and those are the groups we wish to address, political officials unfortunately appear most reluctant. However, an ambitious project such as ours can only survive if public authorities provide the bread, no matter how thin the slice. And the responsible decision makers know that of course. We will provide the butter with our sponsors, through ticket sales and the like. So if public authorities refuse to provide any financial support, then this raises suspicion that the goal is to starve out our initiative until it’s gone.”

Despite the challenging financial circumstances, the ticket prices for the screenings as well as the other events have been kept low consciously: Cinema tickets for students will cost only 6,50 Euros, regular tickets will cost 7 Euros and even the tickets for the premieres and Film Competition screenings will cost only 8 Euros per seat. The Q&As with one of the filmmakers after each screening are of course included in the price. Ticket sales will start in the first week of August.

Last but not least: The fringe events also pack a punch. Relaxed chilling and cool Party Lines in some of Vienna’s top locations, such as the Ost Klub, Strandbar Herrmann and Babenberger Passage, as well as several top-level music acts are all part of the offer. Further details are available on the festival’s web site www.letsceefilmfestival.com and on the LET’S CEE Facebook page.

Journalists and filmmakers have the opportunity to be accredited free of charge and to explore the LET’S CEE during film screenings and exclusive events. Accreditation requests will be accepted via mail to accreditations@letsceefilmfestival.com.