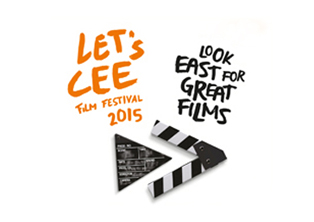 In the frame of the LET’S CEE Film Festival, more than 110 feature films, documentaries and short films from Central and Eastern Europe can be seen from October 1-11, 2015 at Urania Kino, Actor’s Studio, Village Cinemas and other venues in Vienna, all of which in original version with English or German subtitles and for the most part as Austrian premieres. Once again the films will be complemented by a comprehensive supporting programme including Master Classes, panel discussions as well as exhibitions and concerts.

"The festival’s main goal is still first and foremost the promotion and support of Central and Eastern European filmmaking", says festival director Magdalena Żelasko, "The contribution we are making to encourage intra- and intercultural communication at national and international level is not less important in times like these." Also in 2015 the festival is aiming high in trying to set new records, hence the number of 13.100 visitors from the past year is supposed to be raised up to 18.000 this year. "However, these numbers should not obscure the fact that we are still not satisfied with the amount of subsidies especially from the public authorities in Austria", criticises festival director Wolfgang P. Schwelle. Growth prospects will therefore also be increasingly seized outside the festival business. Żelasko: "LET’S CEE shall become a trade mark promoting filmmaking from the CEE region all-year-round." A comprehensive redesign of the festival’s appearance is supposed to optically emphasise the fresh start.

Christof Papousek, managing partner of Cineplexx International and presenting partner of the festival, considers particularly Vienna the ideal location for a festival like LET’S CEE: "As market leader in the matter of cinematography not only in Austria but also in the former Yugoslavia region it is self-evident for us to support initiatives such as LET’S CEE. The festival offers a unique and incomparable opportunity to get impressions of Central and Eastern European filmmaking. Cineplexx is very pleased to contribute to the presentation of international culture in Vienna."

For the FEATURE FILM COMPETITION the Polish film critic TOMASZ RACZEK is going to choose once again the strongest contributions from the CEE region, including BODY from Poland for which director MAŁGORZATA SZUMOWSKA received a Silver Bear. She was not the only award winner in the category 'Best Direction': With AFERIM! directed by RADU JUDE another Silver Bear-winning film is coming to Vienna as an Austrian premiere. Producer Ada Solomon already confirmed her appearance and that she is going to give a Master Class about international film production. We are furthermore pleased to announce the Azerbaijani antiwar film NABAT from ELCHIN MUSAOGLU starring the Iranian actress FATEMEH MOTAMED-ARIA in the leading role. A current showpiece of Russian cinematography is THE FOOL which has been rewarded most recently amongst others in Locarno.

Responsible for the DOCUMENTARY COMPETITION is as in the previous three years the Croatian film lecturer RADA ŠEŠIĆ who is living in Holland. Impressive documentaries with highly political relevance will be once again determining. CHUCK NORRIS VS COMMUNISM, including film clips of action heroes such as Sylvester Stallone and Chuck Norris for example, gives insight into the threat the system during the Romanian 1990s had to endure due to smuggled VHS tapes. Just like the previous film, DESTINATION SERBISTAN is going to be screened during in the School Cinema programme. In his competition entry, director Želimir Žilnik, who won a Golden Bear already in 1969, manages to give a human face to the high number of refugees, often perceived as rather abstract in the media. The fates of extraordinary individuals won’t come off badly this year either: CALL ME MARIANNA, the great winner of this year’s Krakow Film Festival accompanies a woman, who lived as a man for 43 years, in her loneliness and exclusion.

As in the previous editions of the LET’S CEE Film Festival, the directors ARASH and ARMAN T. RIAHI of Iranian origin, living in Austria, are responsible for the selection of the top ten short films out of 300 submissions from young film artists for the SHORT FILM COMPETITION. Contributions for the ALL YOU NEED IS LOVE-themed contest will be accepted until 12 July. The same deadline applies for the TRAILER COMPETITION held in cooperation with OKTO.

The competitions’ winners will be rewarded at the Award Ceremony on 10 October, including also the LIFETIME ACHIEVEMENT AWARD for an exceptionally outstanding filmmaker. Who will be following in the footsteps of Turhan Bey, Branko Lustig and István Szabó, of course won’t be announced until September. As before the Urania figurines with the accompanying prize money for the three competitions will be donated by ROBERT HOFFERER and his company ARTDELUXE. Additionally and for the very first time, the best debut film will be rewarded with a prize of 1.000 Euros, provided by the festival’s official logistics partner GLS AUSTRIA. The programme series PROMISING DEBUTS exemplary highlights the fact that there is much more to discover outside the three competitions.

Besides new productions, LET’S CEE 2015 is dedicated to the greatest CEE classics presented in the frame of 25-THE RETROSPECTIVE for the second time. Four more films, chosen by internationally renowned film experts, of the past 25 years and from the 25 countries covered by LET’S CEE, will be screened a quarter of a century after the fall of the Berlin wall: AMNESTY by BUYAR ALIMANI from Albania, SÁTÁNTANGÓ by BÉLA TARR from Hungary, FINE DEAD GIRLS by DALIBOR MATANIĆ from Croatia and MY DOG KILLER by MIRA FORNAY from Slovakia.

Dedicated to the young Russian filmmaker YURI BYKOV, whose film THE FOOL will be running in the competition, a main focus will be placed on his filmmaking, including works such as THE MAJOR and TO LIVE. "Because, surprisingly, none of his internationally multiply awarded films was ever shown in Austria before," so Magdalena Żelasko’s explanation for the festival’s attraction of the 33-year-old director, author, composer and actor.

According to the motto '70 years since the end of World War 2', there will be once again an ANTIWAR RETROSPECTIVE this year. Suitable to this emphasis, Agnieszka Holland’s masterpiece EUROPA, EUROPA will be presented in the frame of the SCHOOL CINEMA 25 years after the world debut. Not enough: SALLY PEREL, whose dramatically moving story of survival ICH WAR HITLERJUNGE SALOMON was the literary source for the film mentioned before, will be answering the young audience’s questions as contemporary witness after the screening. Perel is, alongside the Slovenian author and director GORAN VOJNOVIĆ and the writer MARCIN SZCZYGIELSKI from Poland, one of three authors coming to Vienna within the new series FILMS & BOOKS, a cooperation with BÜCHEREIEN WIEN.

As the first film festival ever, LET’S CEE 2015 is going to be included in the programme of the ORF-LONG NIGHTS OF MUSEUMS. The documentary MUSEUM "REVOLUTION" will be screened a few times in a row at Wiener Urania. With her film the Russian director with Ukrainian relatives NATALIA BABINTSEVA, who resides in Moscow, brings the vision of museumization of the cultural aspects of the Euromaidan Revolution in Kiev to the screen. A number of exhibits on display in front of the cinema hall will make the Urania itself seem like a museum for one evening. And as usual, members of the film crew will be present and available for Q&As.

Once again this year, LET’S CEE remains true to its chosen path and is going to invite numerous internationally known filmmakers to Vienna – at least about a 100. High-class GET TOGETHERS with film guests and the Austrian film and media industry shall initiate transnational cooperations within the cinematographic sector and support promising talents from Central and Eastern Europe plus Austria.

MASTER CLASSES by and with famous international filmmakers and artists will be organised for the third time already. Apart from the Serbian director ŽELIMIR ŽILNIK and the successful Romanian producer ADA SOLOMON, the Czech star photographer JAN SAUDEK as well as IVO SALIGER, alias IVAN NOVAK, from the legendary Slovenian band LAIBACH will come to Vienna and offer Master Classes. Both their works will be additionally presented in films.

CONCERTS with a focus on films and a PARTYLINE will round up the wide-ranging programme.

The organisers are happy about both old proven programme partners such as BRUNNENPASSAGE, who will be on board again, and new cooperating partners like TANZQUARTIER WIEN and, in the media sector, KURIER and BUM MEDIA.

10-tickets and festival passes will be available from 1 July via Oeticket and Eventim Europe-wide, the regular ticket sale will start mid September.

With this in mind: LET’S CEE YOU SOON!

ATTENTION: media representatives can apply for accreditation for free until 30 September via accreditation@letsceefilmfestival.com.