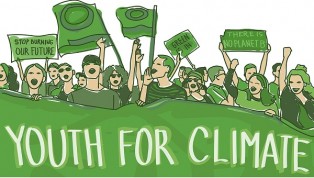 Roll the films for energy transition!

From October 18, the EU Youth Cinema: Green Deal is dedicated to the field of tension between energy and climate. Films and discussions in 21 cinemas in five countries will be accompanied by an attractive streaming offer. The event is aimed not only at school classes, but also at interested audiences all around the world. In addition to the European Union, the Austrian Ministry for Climate Protection is a supporter this year for the first time.

Russia's war of aggression against Ukraine has led to severe distortions on the international energy markets. Reason enough for the European Commission to drastically accelerate the transition to clean energy. "Only if Europe reduces its dependence on fossil fuels as quickly as possible can the freedom and independence of our energy supply be secured in the long term. That means using energy sparingly and rapidly expanding renewable energy sources – solar, wind, hydro, forest," says Minister Leonore Gewessler, who with the Climate Protection Ministry is a key supporter of the EU Youth Cinema: Green Deal project and its cutting-edge focus on "Energy & Climate."

The complex topic is to be made understandable to young people with the help of European films and discussions with exciting guests such as the meteorologist and science journalist Andreas Jäger, TV host Eser Akbaba and a number of other EU, climate and energy experts (including online with the Austrian climate researcher Helga Kromp-Kolb and her Danish colleague Jesper Theilgaard). Andreas Jäger sees the need for urgency: "If we do not manage to turn the corner towards more climate protection today, then it will be the young who will have to pay the price, not the old. That's why the younger generation has every right to demand more climate protection and a different world."

Initiated by the LET'S CEE Film Festival Association and coordinated across countries, EU Youth Cinema: Green Deal, launched this May and provisionally scheduled to run for two years, is co-funded by the European Union and implemented in collaboration with a number of national and European partners. The program draws attention to environmental challenges and promotes awareness of sustainable lifestyles. The green film collection will include no less than 25 European productions presented in Cineplexx cinemas in 21 cities in Austria, Croatia, Romania, Slovenia and Northern Macedonia or via the streaming platform www.euyc.green. Workshops, lectures, discussions and didactic materials round off the educational offer. Christof Papousek, CFO and co-partner of Cineplexx: "The cinema as a place of mediation is still best suited to motivate and inspire a young audience and to create a sense of community, which will hopefully also be reflected in many climate protection initiatives in the end."

As part of the "Energy & Climate" focus, eight European productions will be presented to participating school classes in five countries. Most are available at www.euyc.green, such as the gripping documentary THE CAMPAIGN AGAINST THE CLIMATE (Denmark, Belgium, Norway, Switzerland, Finland 2020) by Danish filmmaker and journalist Mads Ellesøe, which illustrates how the oil industry, with the help of highly paid lobbyists, has been systematically sabotaging climate protection efforts for decades. Two films can be seen exclusively on the big screen, including THE LAST GENERATION (Poland 2021), in which director and climate activist Mikołaj Borowy paints an authentic portrait of a generation increasingly radical in its commitment to the climate movement. But also the documentary CLIMATE CHANGE – THE FACTS (UK 2019), hosted by Sir David Attenborough and produced on behalf of the BBC, in which filmmaker Serena Davies offers an insight into scientific theories on climate change – while also revealing how people around the world are trying to prevent further warming.

An invitation to everybody

Several films from the "Energy & Climate" focus area will be made available to a wide audience worldwide at www.euyc.green. If you still prefer to see the films in the cinema though, you are cordially invited to visit the Village Cinema Wien Mitte, Actor's Studio Wien, Stadtkino Villach or the Geidorf Kunstkino in Graz on November 13. In cooperation with Austria's largest cinema operator Cineplexx, outstanding European productions will be presented there with free admission. The exact program will be published shortly on the websites of the respective venues.