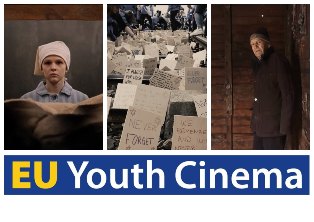 „BE VIGILANT AND WISE“

„BE VIGILANT AND WISE“

The fourth edition of the EU Youth Cinema is dedicated to the topics of peace work and culture of remembrance. The film programme includes two Austrian premieres, and several Holocaust survivors will answer questions from the audience. Due to the pandemic, the film and discussion series will again take place online.

The current focus kicks off during today’s Day of Remembrance against Violence and Racism in memory of the victims of National Socialism and Europe Day. Within the EU Youth Cinema, implemented by the LET'S CEE Film Festival in collaboration with several cooperation partners, three exciting and equally didactically valuable documentaries will be shown until 10 July, demonstrating the unprecedented crime of the Nazi regime on the basis of individual fates.

With "Facing Auschwitz" by Karl Pridun and Alexander Stipsits (Austria 2020) and "The Midwife" (Poland 2020) by Maria Stachurska, two Austrian premieres are part of the programme. The documentary film "Mauthausen – Two Lives" (Austria 2020) by Simon Wieland, which is very popular with schools, completes the offer. The streaming offer is available free of charge to young people, registered in groups by teachers or supervisors, from 5 May to 10 July and again in extended form from 1 September.

This time, however, all other interested people can get to know the film programme of the EU Youth Cinema as well. As part of the programme "In Memory. Cinematic Remembrance of the Victims of the Concentration Camps of the Nazi Regime," the Embassy of the Republic of Poland in Vienna and the Polish Institute Vienna will provide streaming vouchers for all three documentaries. The programme can be accessed throughout Austria between 5 and 19 May at https://vimeo.com/ondemand/inerinnerung.

The online talks, which will be streamed live between mid-May and the beginning of July, are aimed at a broad audience and can be followed free of charge by anyone who registers in advance (at education@youth-cinema.eu). This time, it is mainly Holocaust survivors themselves who will be answering questions. Among them is Ilse Melamid (née Hönigsberg), who was born in Vienna in 1928 and was rescued eleven years later on one of the last children’s transports to England. Also present will be 95-year-old Polish Stanisław Zalewski, who was deported to the Auschwitz-Birkenau and Mauthausen-Gusen concentration camps for his resistance activities and currently holds the positions of Vice President in the Presidium of the International Auschwitz Committee and Chairman of the Polish Association of Former Political Prisoners of Hitler's Prisons and Concentration Camps. Finally, Stefania Wernik, one of the protagonists of the film "The Midwife", who was born in Auschwitz-Birkenau in 1944, will tell her moving life story. She is assisted by her husband Jan, a survivor of the Ukrainian massacre of Poles in Volhynia. The couple, who raised four children and have nine grandchildren and ten great-grandchildren, have an important message to the world: "No more war and fascism, which bring death, genocide, atrocities, the bloodbath and loss of human dignity. The ideologies of this world are insidious, as soon as you are blinded by them, the worst can happen again. Be vigilant and wise; let no one dominate you."

The fourth edition of the EU Youth Cinema with a focus on peace work and culture of remembrance will take place from 05/05/2021 to 10/07/2021 and will be extended and continued between 01/09/2021 and 06/01/2022. Groups of young people who wish to take part in the EU Youth Cinema offer free of charge must be registered by their teachers and supervisors at www.youth-cinema.eu. The discussion panels via live stream, on the other hand, can be followed free of charge by all interested parties who register in time at education@youth-cinema.eu. On the freely accessible Vimeo platform https://vimeo.com/showcase/8405912, linked to the project and regularly updated, further information and content – such as statements, short films, trailers and presentations – can be found. The focus on peace work and culture of remembrance is offered by the LET'S CEE Film Festival in cooperation with projektXchange of the Austrian Red Cross, the association MoRaH – March of Remembrance and Hope – Austria, the IFTE – Initiative for Teaching Entrepreneurship as well as the KPH Vienna/Krems and supported by the Future Fund of the Republic of Austria, the Austrian Film Institute and the collecting societies VAM and VdFS.

The Film Programme of the EU Youth Cinema

Three award-winning Austrian films will be presented that deal with various aspects of peace work and remembrance culture. "The Midwife" (Poland 2020) tells the story of Stanisława Leszczyńska, a heroine of the Occupation. The midwife from the Polish town of Łódź attended some 3,000 births in the Auschwitz concentration camp without losing a single child. Director Maria Stachurska, privately the mother-in-law of Robert Lewandowski and a relative of Stanisława Leszczyńska, looks into the source of strength of a person who fought for human dignity under extremely inhumane circumstances.

The film "Mauthausen – Two Lives" (Austria 2020) by director Simon Wieland documents the story of two people who witnessed the horrific events at Mauthausen concentration camp during the Nazi regime – Stanisław Leszczyński, born in Łódź, as a prisoner, and Franz Hackl, a native of Mauthausen, as an apprentice in the camp's locksmith shop. Two fates that could not have been more contrary – and yet have so many disturbing similarities.

In the documentary "Facing Auschwitz" (Austria 2020), Karl Pridun and Alexander Stipsits accompany four young people from Austria on a three-day commemorative journey to Auschwitz and on their associated participation in the March of the Living, an international commemorative march from Auschwitz I to Birkenau. The visit to the former concentration camp Auschwitz, a conversation with contemporary witness Viktor Klein and the confrontation with today's Jewish life in Krakow's Kazimierz district are parts of the MoRaH trip and formative experiences for the young adults.

Young people can watch the films online and for free via a link, provided they are registered in groups by teachers or supervisors at www.youth-cinema.eu. Of course, teachers will be provided with extensive and carefully prepared teaching materials for each film for preparation and follow-up free of charge.

The detailed film program is available at www.youth-cinema.eu/programm