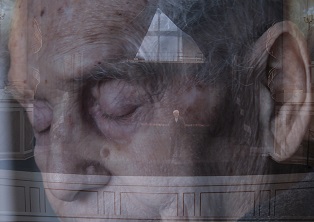 MAUTHAUSEN – TWO LIVES, the latest documentary by Austrian director Simon Wieland, premiered in October 2020 at the Jewish Film Festival in Vienna. Within barely two weeks, before the domestic cinemas had to close again due to the second lockdown, over 1,000 viewers already wanted to see the production on the big screen. Now the film is being shown via video-on-demand, to Austrian youngsters as well as to interested viewers in Austria and abroad.

“Mauthausen, like Auschwitz, is a synonym for the Holocaust, for the crimes of National Socialism, for guilt and shame. Everything that happened back then has an impact on the present and our lives today.” Simon Wieland

The film, which foregoes any special effects, documents the impressions and memories of two men who experienced the horrors of the Mauthausen concentration camp from completely different perspectives: Stanisław Leszczyński, born in Łódź in 1922, speaks from the perspective of a prisoner who narrowly escaped death several times, while Franz Hackl, born in 1927, a native of the village of Mauthausen, recalls his time as an apprentice in the camp's locksmith shop. The fates of the two contemporary witnesses could not have been more contrasting – and yet they have many disturbing things in common. Together they create a powerful and poignant picture of human and, above all, inhuman behavior in the face of crime – but that is not all. Listening to the two protagonists, one can draw courage and hope that there can always be a way out.

An Austrian film goes around the world

"In difficult and uncertain times, people are longing even more than usual for clever and authentic films. MAUTHAUSEN – TWO LIVES is such a film," says Magdalena Zelasko, the managing director of CEE FILMS. Just in time for this year's Holocaust Remembrance Day, she is now launching the film’s international exploitation via video-on-demand, in Austria as well as in a number of other countries. In Italy, Moldova, Romania, Slovakia and the United States, thanks to the support of the relevant Austrian Cultural Forums in Rome, Bucharest, Bratislava and Washington, the Embassies of the Republic of Austria in Chișinău and Sofia as well as the Sofia University St. Kliment Ohridski and the Austria Libraries abroad, the film will initially be available to view free of charge, while heavily discounted rates will apply until the end of February in Austria. In addition, the Austrian Embassy in New Delhi will be organizing on-site film screenings. And after the digital German premiere late February, organized by the Austrian Cultural Forum in Berlin, MAUTHAUSEN – TWO LIVES will be available for streaming worldwide.

As part of the EU Youth Cinema, the film can be – with immediate effect – watched free of charge online by registered school classes as well as groups of young people. The Austria-wide educational offering on the current focus of human rights is enjoying enormous popularity, especially in times of distance learning. The number of registrations has already exceeded the 4,000 mark.

Event tip: At the last talk of the current EU Youth Cinema Frederick Terna will be a guest via zoom meeting. The 97-year-old Holocaust survivor, who was born Friedrich Arthur Taussig in Vienna in 1923, grew up in Prague and now lives in New York. He was interned in the Linden retraining camp, the Theresienstadt concentration camp, the Auschwitz concentration camp and the Kaufering concentration camp. After his liberation, Terna returned to Prague as the only survivor of his family, from where he moved to France in 1946 and then to Canada. Since 1952 and to this day he has been working as a painter and lecturer in New York. "When we decide that we have responsibility for each other, that is a process of healing," is Terna’s life motto. He will be greeted virtually on the International Holocaust Remembrance Day by around 300 young people from Austria and the Czech Republic. The remaining seats to the online talk with Frederick Terna, moderated by Markus Priller (projektXchange at the Austrian Red Cross) and Iris Singer (MoRaH), can be reserved via info@youth-cinema.eu.