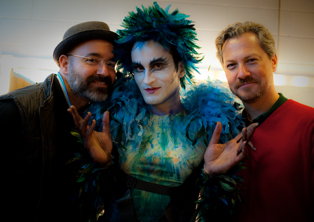 The first Urania Awards were awarded to the winning films of the LET'S CEE Film Festival on Sunday night. The Turkish film Zenne - Dancer by directors M. Caner Alper and Mehmet Binay as well as the Polish documentary Argentinian Lesson came out on top. Hollywood legend Turhan Bey was paid tribute for his life's work.

The homosexual Ahmet Yildiz was murdered by his own father on July 18, 2008. The first honour killing of its kind in Turkey has inspired directors M. Caner Alper and Mehmet Binay to their stirring film Zenne - which means belly dancer. The two directors prevailed in the feature film competition over strong competitors such as Romanian director Radu Jude's film Everybody In Our Family or the Russian drama Siberie, Monamour by Slava Ross. "Zenne transports a message which is not only important for society, but also triggers a strong reaction within the audience. This tragedy should be a personal reprimand for all those who are trying to subjugate human rights to political or religious norms", sais jury leader Tomasz Raczek. The film's leading actor, German-born actor Karem Can, received the award in the Award Ceremony in the Wiener Urania on Sunday night.

One of last season's most touching and memorable documentaries, Wojciech Staroń's Argentinian Lesson, won the documentary competition. Other competitors were multiple award winning documentaries such as the Georgian-Latvian coproduction Ramin by Latvian director Audrius Stonys and Invisible Strings - The Talented Pusker Sisters by Hungarian director Ágnes Sós. Staroń received the award for "his extremely empathetic reflexion of the world beyond stereotypes or common cinematic schemes", as the jury argued in its statement. Along with the Urania Award designed by the exceptional artist Tone Fink from Vorarlberg, the winners also received a prize money of 1.500 Euros.

The LET'S CEE organizers also awarded a Lifetime Achievement Award for the very first time. The winner, Austrian Hollywood legend Turhan Bey, was not able to participate in the ceremony, which is why actress Asli Bayram took delivery of the Star of the Urania award in his stead after the laudation by Andrea Eckert.