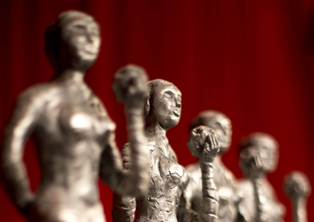 Jury: A gunfight. A man gets stabbed in his thigh. The knife is stuck dangerously in his left. The man remains unaffected. Instead of screaming, he shoots, and shoots them all dead. He is bound to a wheel chair, which is of great advantage for him, as his being paralysed from the waist down means no pain. He’s a professional hitman. With the best disguise in the world. As who will look at him? Too often, people with disabilities are being overlooked in everyday and public life. We award a film that manages to depict people who can’t walk any longer. A comical gangster comedy with wheelchair users in the lead roles, that presents amateur actors as real professionals. A film that avoids every form of consternation, where we are allowed to laugh about a catheter instead of a gun emerging during a strip search of a disabled person by a bodyguard. In his second movie, the Hungarian filmmaker Attilla Till illustrates the escape from everyday life in a home for the disabled. His method is original, visually elaborate and nerve wracking, completely normalising the fact that people in wheelchairs are in the lime light here. Thank you for this wonderfully entertaining and smart film. It is our unanimous opinion that this is the best film of this year’s feature film competition. The prize for the best feature film goes to "Kills on Wheels" by Attilla Till.

Jury: In this film, the Bible turns into a weapon of puberty. Venya, a student, has found Christianity and learned the Bible off by heart. With his biblical quotes, he can argue and win against anyone and always find the right explanation. He thus manages to upset the entire moral system of his school. Director Kirill Serebrennikov created a clever, original and complex film with stunning imagery. A film on the struggle of morals and values in today’s Russia, about facades of tolerance and the longing for totalitarianism. Our Honourable Mention goes to “The Student” by Kirill Serebrennikov.

Jury: And now to our winning documentary: a film that kept us breathless. We follow the fate of a family in a small Transylvanian town throughout a period of seven years. A dense and sensitive series of events build up to moments of great intimacy and intensity, rethinking universal and human questions – of life, love and death. The winner of this year’s LET’S CEE Documentary Competition is “A Mere Breath” by Monica Lãzurean-Gorgan.

Jury: Her whole family’s weight lies on her shoulders: 14-year-old Olga not only has to handle everyday life with her alcoholic father and autistic brother and be the only grown-up, but also is forced upon a possible reunion with her absent mother. “Communion” by Anna Zamecka depicts an incredible young woman and an impressive family structure. Despite the steady and difficult conditions, hope never fails to appear.

Jury: A little Bulgarian village at the Turkish border becomes a human anchor during the refugee crisis of 2015. Ivan, a postman, wants to be elected as mayor in order to take in Syrian asylum seekers and thus prevent his little hometown from becoming extinct. “The Good Postman” is a remarkable documentary study and a gateway to humanity.

Jury: “I’ll be a normal person”, is how protagonist Hristo describes his hopeful goal. He is as credible in his attempt to fulfill his wish and have a flat, a job and a family as he is in his failure and desperation. Girgor Lefterov and Todor Matsanov directed an authentic, unpretentious and sensitive portrait of a homeless teenager, but avoid to turn this social drama into “social pornography” by preserving the protagonist’s integrity. Heroic Hristo and Dimitar Nikolov, the actor fantastically portraying him along with the director’s smart dramaturgy, wisely chosen cuts and omissions can break one’s heart.

Jury: Having a dog or an axe comes in handy when daring to go outside in this Romanian backland near the Ukrainian border. This gripping Western tells the story of an inheritance nobody would want to have. A huge piece of no man’s land becomes the lawless space of an atmospheric playing field: the endlessly distant space turns into a tight narrowness without room to move. Bogdan Mirică’s thrilling critique of society produces a striking effect with little effort. A comparison with “No Country for Old Men“ thus becomes more than just justified.

Promising Debuts
Honourable Mention
Together For Ever
Director: Lina Lužytė

Jury: Despite all efforts and background noises, which the director, Lina Lužytė, uses to confront the family of a mother, father and daughter, all portrayed in her film, her protagonists don’t seem to be able to communicate with each other even until the very end. The name of this family film is “Together for Ever”, however, “together” in this context rather means “parallel”, and the familial part actually refers to loneliness. In quiet and very careful tones Lina Lužytė stages a drama with an after effect characterised by original, but discreet moments.

Jury: The film is about finding magic in a depressing environment of old people in a retirement home, painted as a deeply poetic picture of life’s vulnerability. It is an original approach to the imminence of dying with people slowly ebbing away in front of society’s indifferent eyes. The jury awards “Buzzing of a bumblebee” by the Russian director Vladimir Beldian for its unique visual and narrative style and warmness shown for the elderly cast in one of many old people’s home. Rewinding life and picking the ultimate dream is masterly shown.

Jury: The jury gives a special mention to “A New Home” by Žiga Vrc for a sensitive, stylish and well-crafted portrait of a woman who has developed paranoia, resonating from a loneliness born between the walls of a new, empty residential building which stands in a strong contrast to a crowded neighbouring refugee camp. It’s a film about consequences of unjustified fear.

Jury: For its humorous take on the picture of an ideal woman and romantic relationships, the jury gives a special nod to “Masterpiece” by Irina Storozhenko. It’s an unusual take on the concept of happiness and love fulfilment.

Jury: We have decided to give our special mention to one more film as an acknowledgement of its importance in depicting the crudeness of a deeply patriarchal society. “Shanghai, Baku” by the Azerbaijani director TeymurHajiyevpeeks into a hidden ghetto of Baku and its residents.

Best Acting Performance in a Competition Film:
The Croatian actress Ksenija Marinković for her performance in The Constitution.