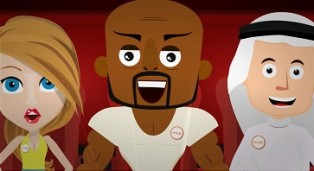 A 2D animation from Ukraine is the winner of this year’s Trailer Competition of the LET’S CEE Film Festival.

With great pleasure we announce the winners of this year’s LET’S CEE Trailer Competition. Out of 26 creative entries by filmmakers, video artists and aspiring talents from Austria, Germany, Russia, Ukraine, Turkey and more, a six-member jury* chose the trailer by an Ukrainian-Russian filmmaking trio to be the number one:

By means of a professionally implemented 2D animation the winning spot presents a cinema hall with numerous visitors. According to the slogan MOVIES UNITE PEOPLE THROUGH [E]MOTIONS we encounter laughing, crying, astonished and happy cinema guests. And not only the multiple feelings represent diversity. An entertaining trailer with a wink the LET’S CEE audience will definitely respond to.

Vadym Shapran, producer, director and screenwriter of the trailer, originates from Kiev, where he is better known under the name Norlack as video editor of films, anime and music videos. He graduated from Kiev University of Economics and completed numerous film classes. In 2012 he founded the production studio for graphic design and multimedia ‚Avision Media’ specialised in commercial animation. For various video projects he won numerous prizes at international festivals. No less important are his two Russian colleagues Aleksei Kislitcin, responsible for motion design and animation, and sound designer Denis Nechipurenko, who together helped Shapran achieve this remarkable LET’S CEE trailer.

Sarah Al Hashimi and Patrick Kwaśniewski from Austria earn a successful second place with an optimistic and colourful trailer which features 22 people from Vienna with migration background, each uttering the festival motto LOOK EAST FOR GREAT FILMS in their native language, including 18 of the CEE languages spoken at the festival plus English. Since it was a close decision between the first and second place, all of the participants in the trailer will be rewarded with a contingent of free tickets.

Mario Andric from Austria achieve the third place with his impressive 3D animation skilfully putting the brand new LET’S CEE festival logo, an orange double arrow, in a creative and minimalistic manner in the limelight.

The fourth and fifth place go to Kuesti Fraun from Germany for his convincingly modest contribution right from a subway underpass and to Simon Rabeder, David Rabeder and Baris Alakus from Austria who newly staged a crucial scene of the classic “Gone with the Wind” in LET’S CEE style.

Honourable mentions are given to Harald Huto from Austria and Sergey Sofiyak from Ukraine.

All rewarded filmmakers are going to receive a festival pass on request, granting them free access to all screened films and events of the supporting programme during the festival week.

The winning trailer can bee seen from next week on in numerous Cineplexx cinemas in Austria, Slovenia, Croatia, Serbia, Montenegro and Macedonia and will be shown before every screening during the festival week, it will be presented on the festival homepage, the LET’S CEE YouTube channel and the LET’S CEE Facebook profile, and last not least broadcasted on TV, that is on the Austrian TV channel OKTO.

Impressed by the quality and variety of the submitted works, OKTO’s artistic direction decided to present all above-named trailers several times until the film festival in October.

Additionally, the top-ranked trailers will be shown before the official Short Film Competition on 8 October at Urania cinema and within the frame of a special screening at Village Cinema. The respective filmmakers will have every right to say that one of their cinematographic projects didn’t only run on TV but in the cinemas as well – in fact for a really large audience. ;-)