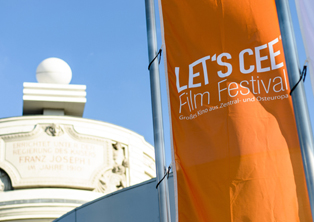 Winners and Conclusions: There is still hope

At the Award Ceremony of the LET’S CEE Film Festival 2014 the winning movies of three competitions were awarded last weekend in the Urania, Vienna. Conclusions were drawn.

The third edition of the LET’S CEE Film Festival ended last weekend. This year, from October 2nd to 11th in Vienna, overall 91 feature films, documentaries and short films from Central and Eastern Europe were screened with either English or German subtitles. With slightly over 13.000 visitors and 138 screenings and events the festival directors Magdalena Zelasko and Wolfgang P. Schwelle were able to raise the numbers of the previous year enormously (9600 visitors).

Also the number of international film guests increased respectably. About 100 filmmakers and actors came to Vienna this year (52 guests last year): again a great deal of famous names among them. The two-time Oscar winner and producer Branko Lustig from Croatia had to answer the audiences’ questions as well as the filmmaker and Academy Award winner István Szabó from Hungary, the director and winner of a Golden Lion Milcho Manchevski from Macedonia and his Romanian colleague Cristi Puiu, winner of a Golden Bear, furthermore, the actor Scot Williams (England), shooting star Ana Ularu from Romania and the Polish actress Jowita Budnik.

The three winners of the film competitions were honoured at the Award Ceremony in the Urania last weekend.

Please have a look at the Jury Statements:
www.letsceefilmfestival.com/news-detail-en/items/255.html

The Urania Award 2014 in the category „Best Feature Film“, which consisted of nine movies, was awarded to the Estonian director Ilmar Raag for his international coproduction (Russia/Estonia/Finland/Belarus/Kazakhstan) I WON'T COME BACK. The road movie about the discovery of love „touches by means of the admirable performance of two young actresses and the story, which does not lose ist hope and optimism despite sometimes quite adverse and cruel conditions“, so the jury’s explanation. The opening film of the LET’S CEE Film Festival 2014, Kornél Mundruczó’s disturbing multilayered parable about inhumanity WHITE GOD (Hungary/Germany/Sweden), awarded with the prize Un Certain Regard in Cannes, as well as the bittersweet, original comedy MONUMENT TO MICHAEL JACKSON (Serbia/Germany/Macedonia/Croatia) by Darko Lungulov were honoured with special mentions. Promising competiting films such as BRIDES (Georgia/France), PAPUSZA (Poland) and ROXANNE (Romania/France) had to leave empty-handed.

In the documentary competition PIPELINE (Russia/Czech Republic/Germany) received the main prize. The captivating and sharp-witted film by the Russian director Vitaly Mansky entered the competition of nine participating candidates for the Urania Award 2014 as one of the favorites. The jury particularly referred to the movie’s profound and universal truths and how it expressed the filmmaker’s pure empathy for his subjects. Honorable mentions were received by Tatjana Božić for her very personal and open self-reflection in matters of love in her film HAPPILY EVER AFTER (Croatia/Germany) and by Viesturs Kairišs’ for his poetic visual imagery  and meditative pace in PELICAN IN THE DESERT (Latvia).

For the short film competition, curated by the directing brothers Arash and Arman T. Riahi with the motto “The Taste of Freedom”, 200 productions were submitted, 13 of which made it to the final contest. The German-Croatian coproduction THE CHICKEN by the Bosnian director Una Gunjak was unanimously chosen for the main award in the category “Best Short Film”. Marvelous contribution such as KOSHERLAND (Latvia/Germany), PANDAS (Czech Republic/Slovakia) and THE EXECUTION (Romania/Hungary) were especially mentioned by the jury. The fourth honorable mention was the winning movie of the competition’s public voting 8 MONTHS by Hüseyin Aydin Gürsoy from Turkey.

The winners of the main prizes not only received the Urania Award designed by the exceptional artist Tone Fink from Vorarlberg and sponsored by Artdeluxe, but also wann a financial award of 1.500 Euros. The remaining winners were given material prizes.

Already one week ago István Szabó was awarded with the „Stern der Urania“, the Lifetime Achievement Award of the LET’S CEE Film Festival at the opening night.

Photo material (reprint free of charge) is available under the link:
https://www.dropbox.com/sh/a1z3844bss5r3s0/AAC6PhuhLx3zaQGFn_d0yy8Ba?dl=0

Further photo material(reprint free of charge) is available under the link:
https://www.dropbox.com/sh/utlv563ebani1w8/AAAX1SuYQ6YptaQX10MMjWpla?dl=0