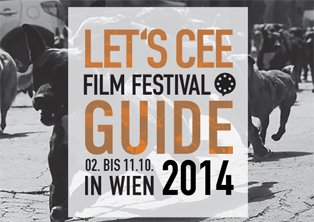 The third LET´S CEE Film Festival will take place in Vienna from October 2nd until October 11th, 2014. During this time it will present around ninety excellent productions from Central and Eastern Europe as well as the Caucasus and Turkey - all of them in the respective original language with German or English subtitles, and most of them as Austrian premieres. No less than thirty-one of these films will be competing in one of the three competitions - the FEATURE FILM, SHORT FILM and DOCUMENTARY COMPETITION.

This year’s Festival will be framed by two extraordinary films: The Festival’s opening film will be WHITE GOD from Hungary. An upheaving, biting and multifaceted film whose true stars walk on four legs. The closing film will be Lithuania’s ultimate box office hit REDIRECTED with its cunning mixture of action, triller, crime and comedy that promises finest entertainment. Naturally, the Festival will once more bring a large number of international guests to Vienna, who will be available to the audience for questions and dialogue. The guest list features the two Academy Award winners Branko Lustig and Istvan Szabo, winner of the Golden Lion Milcho Manchewski, the exceptional artist Ulay, as well as multiple award-winning directors Aida Begić, Isa Qosja and Cristi Puiu.

Another of the Festival’s highlights will be its programme features: 25–THE RETROSPECTIVE, for which leading film critics from all over the world selected the best film from the past twenty-five years from each of a list of twenty-five CEE countries, an ANTIWAR FILM SERIES curated by Branko Lustig as well as the thematical focuses LOVE, COMMUNISM and DEBUT FILMS. Of course, this year’s Festival will once more feature a large framework programme of MASTER CLASSES, CONCERTS, GET TOGETHERS, TALKS and PARTIES.

Textual descriptions and stills from most of the films (reprint free of charge) can be found here
https://www.dropbox.com/sh/utlv563ebani1w8/AAAX1SuYQ6YptaQX10MMjWpla?dl=0