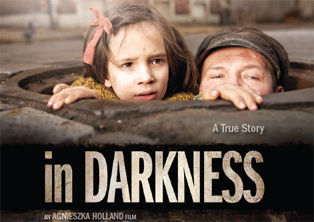 All Eyes turn to the East

The LET'S CEE Film Festival has launched its programme and announces numerous cinematic highlights along with a fine selection of interesting festival guests. Tickets are on sale starting now.

Agnieszka Holland's newest Academy Award-nominated masterpiece In Darkness (original title: W ciemności) will kick off the first LET’S CEE Film Festival on May 28 in Vienna's Urania in the presence of its famous director. Over a period of one week the festival will show a selection of the best feature films and documentaries from Central and Eastern Europe.

The festival will feature recent art-house films, box-office hits and classics from various genres - all of them in their respective original versions with English or German subtitles or in German dubbed versions. The concept with which festival director Magdalena Żelasko wants to address the many migrants and emigrants from CEE countries living in Vienna as well as all Austrian cinema enthusiasts is clear and involves showing as many Austrian premieres as possible.

14 films in the competition…

The Feature Film Competition's team of curators around Mercedes Echerer and Croatian-Dutch filmmaker and university lecturer Rada Šešić responsible for the Documentary Competition will show only productions which have never been screened in Austria before. The Feature Film Competition will show a total of six films, among them films such as Russian director Slava Ross's highly praised second work as a director Siberia, Monamour, or Zenne - Dancer from Turkey, a tragedy inspired by real events around the murder of a young homosexual by his own father (director: M. Caner Alper and Mehmet Binay), as well as Radu Jude's intense and nightmarish family study Everybody In Our Family from Romania.

The Documentary Competition will feature eight films from eight different countries such as Goran Radovanović's Serbian-Cuban joint production With Fidel Whatever Happens, a lyrical as well as laconic portrait of modern-day reality in the socialist archipelago state, or a football fanatic's crazy and entertaining quest for identity in My Mate Manchester United from Bulgaria, and Latvian director Laila Pakalnina's 33 Animals Of Santa Claus, a touching and intriguing film about an elderly lady's love for animals. The winners of both contests will receive the Urania trophy designed by Austrian exceptional artist Tone Fink as well as money awards.

…and 18 more films as part of programme focuses

Jan Sverák's ode to fantasy Kooky, Greg Zgliński's psychological thriller Courage, and Arielle Javitch's disturbing drama Look, Stranger are among the feature films which will be shown as part of certain programme foci, just like the sarcastic documentary classic Disco And Atomic War about how TV shows such as Dallas, Knight Rider and the like contributed to the downfall of the Soviet Union which will be shown as part of the Estonian programme focus, or Pjer Šalica's intimate time travel Orchestra about the long career of the legendary band from Sarajevo which will be featured as one of a number of musical films from South Eastern Europe. Along with several other film highlights the highly commended road movie Tomorrow Will Be Better, written and directed by Dorota Kędzierzawska from Poland, will be shown as Austrian premieres.

A look at the list of the festival's confirmed international guests shows just how much the filmmakers from Eastern Europe appreciate and welcome the idea behind the LET’S CEE Film Festival. The list features the names of thirty directors, screenwriters, producers, critics and actors who will also be available for questions from all film enthusiasts in workshops or at the film symposium.

Tickets for all films are available on the festival's web site www.letsceefilmfestival.com and on oeticket.com. Tickets will of course also be available during the festival week at the box offices of the festival cinemas Urania and Apollo.