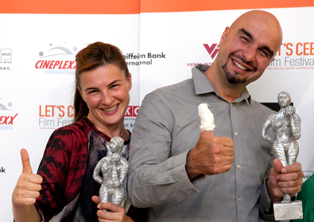 The winning films of the LET’S CEE Film Festival’s three competitions were announced during the Award Ceremony in the Wiener Urania. The winning entries included the feature film Domestic by Romanian director Adrian Sitaru, the Bulgarian documentary The Last Black Sea Pirates by Svetoslav Stoyanov and the Estonian short film Distance by Janno Jürgens.

The feature film competition of the LET’S CEE Film Festival, which specialises on Central and Eastern European productions, went to a representative of the New Romanian Cinema. “For using long camera shots and an elaborate choreography to show grown-ups, children and animals in a most impressive way, for bringing joy, laughter and sadness to the audience and for reducing the gap between commercial and artistic filmmaking, the main award goes to Domestic by Adrian Sitaru”, says the statement by the jury. The Turkish contribution Jîn, a moving story about a young Kurdish woman in the turmoil of war, told by director Reha Erdem through impressive images, as well as the highly praised anti-war drama Circles (Krugovi) by Serbian director Srdan Golubovic received honourable mentions. Strong entries like Hungarian director Istvan Szabo’s compelling intimate play The Door (featuring Helen Mirren), the Polish contribution In the Name of (W imię...) by Malgoska Szumowska, and the deeply moving and highly praised film Halima’s Path (Halimin Put) by Croatian director Arsen A. Ostojic came away empty-handed.

The Documentary Competition saw The Last Black Sea Pirates (Poslednite chernomorski pirati) by Bulgarian director Svetoslav Stoyanov as the winner – an extraordinary, fairy tale-like and black-humoured story about a gang of treasure hunters who live on the edge of society and fight civilisation. The Azerbaijani contribution My Kith and Kin by Rodion Ismailov, a lyrical and very personal documentary about the journey of a child through her native country, received an honourable mention.

The Short Film Competition, which was staged for the first time this year, went to Estonian director Janno Jürgens and his film Distance (Distants), a father-and-son story told in black and white images. Home (Dom tsah) by Russian director Ruslan Magomadov and Stremt 89 from Romania received honourable mentions. The Audience Award also went to Home.

One of the film’s main actresses, Ioana Flora, received the award for Domestic during the Award Ceremony, which was attended by a large number of international festival guests and took place in the Wiener Urania. For The Last Black Sea Pirates, Distance and Home the directors received their awards personally. Along with the Urania Award, designed by the exceptional artist Tone Fink from Vorarlberg, the winners also received prize money of 1,500 Euros, both awards being sponsored by Artdeluxe.

A few days earlier, the makers of LET’S CEE honoured Croatian Academy Award winner Branko Lustig with a Lifetime Achievement Award during a special screening of Schindler’s List on its 20-year anniversary. However, unlike his younger colleagues, the internationally successful producer was unfortunately not able to receive his award personally due to private reasons.