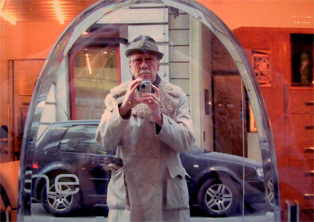 Turhan Bey was a leading man of American movies of the forties. He has worked with almost all stars of his time and was an intimate friend of many of them. His self-mockery, his subtle sense of humour and the ease characterising the way he talked about his life that – according to him – gave him so much, was immediately captivating.

Turhan Bey was born in Vienna on March 30, 1922. His father was a Turkish diplomat, his mother a Jew from former Czechoslovakia. He grew up in wealthy surroundings, with his carefree life in the large house in Hietzing in Kuppelwiesergasse coming to an abrupt end upon the invasion of the Nazis. Turhan Bey‘s mother saw the cheering crowd on Heldenplatz and she knew that they would have to leave this country. They emigrated to the USA via Switzerland and Paris: One of his uncles worked as a mathematician for Albert Einstein, and the family settled temporarily with him in Princeton. There were regular invitations for tea at Einstein‘s place – the uncle had planned a mathematical career for his nephew. The latter, however, doesn‘t have the slightest inclination in that direction; he lures his mother to sunny California for the mild climate.

They rent a house in Beverly Hills, and Turhan Bey attends Ben Bard‘s drama school to improve his English. During a student performance, he is discovered by some Warner Brothers talent scouts and engaged directly. The film is Footsteps in the dark and his partner is Errol Flynn: Turhan Bey‘s film career had begun. His career continued just as effortlessly as his initiation to this tricky business had been. He played European aristocrats, mysterious Orientals, secret agents etc. Universal Studios made a contract with him, and his partners were celebrities like Boris Karloff, Peter Lorre, Brenda Marshall, Kathrin Hepburn, Walter Houston, Maria Montez, Joan Hall and Merle Oberon. Towards the end of the war, Turhan Bey was drafted. When he returned after 18 months, many things had changed. Universal Studios had been sold, and the familial atmosphere that had previously prevailed there was gone.

After he had refused a role, Turhan‘s contract was sold on to Eagle-Lion Studios. He made a considerable number of movies for that company, until he decided – more or less overnight – to finish his career and return to the country that he had left as a refugee with his mother and grandmother ten years earlier. Like all emigrants, he was not received with open arms in Vienna: their house had been Arianised and the „Arians“ were by no means willing to return it to their owners. It took some time for the Bey family to get back their former property. Since then, Turhan has spent his life in Vienna; he returned to the USA for a few TV roles, but Vienna has remained his main residence. He bought a few movie theaters – in this way, maintaining a certain connection with his former profession – and started to pursue an old passion: photography. Landscapes and beautiful women were his favourite subjects.

He was an extraordinarily talented storyteller, and his stories about tea at Einstein‘s place, glittering Hollywood parties or personalities like Errol Flynn, Peter Lorre, Lana Turner and Kathrin Hepburn never failed to fascinate his listeners. Apart from the hilarious anecdotes that he was telling in a brilliant manner, the remarkable thing about his character and his life was the lightness with which he was able to let go of things that others would have had to fight for. Letting go seemed to be a quite natural thing for him, and accordingly he happily designated himself as detached and therefore unprotected against loneliness. His life took place in the small house in Paradisgasse; his apartment and his car in Beverly Hills waited for him in vain. He prefered to walk the dog or to work in his attic turned into a photographic studio.