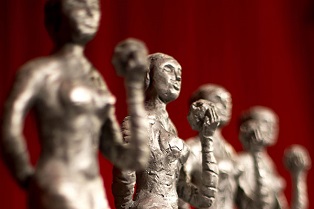 Press Photos of the Winners and Winning Films (reprint free of charge):
www.dropbox.com/sh/llq8zuu5ulyn5iw/AABSqQKt7DwdO1Zdwcwj5ePka?dl=0

Jury: Giving birth to a child is the strongest thing a woman can ever do in her live. It is painful, it is disturbing and it sets out emotions you never thought could exist.

After giving birth the instinct of motherly love often does not come directly, it needs a minute, an hour, a day, a week or maybe longer… a mother needs time to heal her frazzled and empty body and come back to the world she was living in – this is what we call childbed.

Mara is giving birth to IVAN alone in a hospital. When she comes back to her home she gets beaten up by some mafia guys because she is in love with the wrong man in the wrong society where you can trust nobody and everybody is alone. She starts an incredible journey with her baby and finds her self-confidence in her strong, deep and heavy love for IVAN in the end.

Thank you, Janez Burger, for that deep and emotional road trip. Thank you for that taboo breaking opening scene and your courage to follow a woman who just gave birth and searches for herself and for the love of her baby in a patriarchal society of corruption.

Thank you Maruša Majer! Your performance is outstanding! We could’t believe what we saw, it was courageous, deep, painful and beautiful. We can’t wait to see you soon again!

Thanks to cinematographer Marko Brdar. The look of the film you created with production designer Vasja Kokelj, costume designer Ana Savić-Gecan and make up artist Alenka Nahtigal was fantastic. We loved the reduction of colours, the simplicity, how you just stayed close to the actress and made the drama so radical.

We also thank editor Miloš Kalusek for so much suspense and composer Damir Avdić for you great music!

Giving birth to child is hard and not an easy thing to do but it sets free so much power in every woman everywhere. This price is also dedicated to every mommy in the world!

Jury: When the world is full of political and ethnic conflicts, the films provides a vivid lesson of the wounds which are hard to heal from even after the conflict or the war is long over. Even though the story is based on the aftermath of the particular civil war, atrocities and ethnic cleansing in former Yugoslavia, the film could be read as a warning to what happens if people forget basic human values. At the same time, it gives hope that former mortal enemies can reconcile and psychological wounds can be healed.

Jury: Being very realistic in form, this film is actually a metaphor for social and moral disruption in the post-communist countries of Eastern and Central Europe. The mosaic of individual little stories morphs into one big picture of lost direction. The filmmaker suggests not without pain that the new social order, which is presumably based on democratic values so far, cannot give any clarity for the future and that hatred can be substituted by understanding.

Jury: The award for the best documentary goes to “When the War Comes” by Jan Gebert. Slovak adolescents spend their leisure time in paramilitary camps of the “Slovak Recruits”, an association that has made the “preservation of Slovak values” their mission. Protagonist Peter Švrček, head of this right-wing youth movement, acts decently, loyally to the constitution, and he avoids making extremist statements at any cost. Still, his right-wing attitude is apparent.

These days, right-wing and radically right-wing parties win elections all over Europe. For Austria, also, this was recently the case. Their leaders are no bald-headed Nazis but young, good-looking, charismatic, smart, slick “achievers”. They have broad knowledge on the media and know exactly how to present themselves – always apposite to what is required at the moment – just like our protagonist, a wolf in sheep’s clothing. Facts are intentionally reinterpreted and turned into alternative truths.

The parallels to the way current Austrian members of parliament are presented in the media are alarmingly evident – especially FPÖ vice chancellor Heinz-Christian Strache who himself has taken part in paramilitaries at the beginning of his political career –, as well as the perfectly planned medial staging of Sebastian Kurz who, just like our film protagonist, knows how to present radically exclusive statements in a smart, seemingly harmless way and to make them socially acceptable.

The jury has chosen a film that has the finger firmly on the pulse in an unspeakably powerful way. It seems unagitated and goes without unnecessary staging or aestheticising, it is at the right place at the right time and, therefore, on point. The film has impressed the jury because it shows the mechanisms of power and exposes the system without a wagging finger, voice-overs or large-scale production.

Jury: We also wish to praise the film OVER THE LIMIT by Marta Prus. Just like the Slovak Recruits who are just numbers in a row, this young woman becomes the object of an institution – a faceless, other-directed good. A beautiful story about Rita who tries to overcome her limits. No fake moments, authentic and honest.

Jury: We decided to award the prize to a film that manages charmingly to bring together drama and comedy. It tells the story of a son who helps his father, set to the background of a small country struggling with economical problems. Together with his cast and crew, the director presents a believable character who finds a special cinematic recipe to repair a broken relationship from the past and finds a new path for himself.

The prize for the best debut film goes to SECRET INGREDIENT.

FILTHY:  We give a special mention to the main actress DOMINIKA MORAVKOVA in the film FILTHY. Together with her director TEREZA NVOTOVA she manages to deal with a delicate and relevant topic in a captivating way.

MEDA: We give a special mention to the film MEDA OR THE NOT SO BRIGHT SIDE OF THINGS because of the way the director EMANUEL PARVU and his main actor SERBAN PAVLU show us the struggle of a character in a small community.

WINNER: WOULD YOU LOOK AT HER
Director: Goran Stolevski

Jury: It was not easy. Like always. But at last, all members of the jury agreed that the best short film at the LET’S CEE Film Festival 2018 is WOULD YOU LOOK AT HER by Goran Stolevski from Macedonia. We liked the unusual story about an unconventional, young woman in a men’s world driving everybody crazy in order to be heard. And we liked the humorous fact that she wants to win the competition in diving for the holy cross to make the church pay for a new TV set for her sick father. Congratulations to Goran Stolevski and especially to the young main actress Sara Klimovska for her outstanding performance.

THE BEST FIREWORKS EVER / Najpiękniejsze fajerwerki ever by Aleksandra Terpinska, POL: A perfect picture of the world of young people struggling between fighting for freedom and ignorance. Touching with strong pictures, strong dialogues, a wonderfully acting cast and a fabulous camera.

HIDE AND SEEK / Bújócska by Benő Gábor Baranyi, HUN: What a great achievement working out such a sad, true story with amateurs and touch us all with a fantastic cast.

Jury: First of all, we'd like to point out that the films of the Promising Debuts section certainly do not have a lower artistic level and professionalism than the films of the Feature Film Competition. We think that the debut films should get the same chance to be presented to a broader and international audience.

The jury choses EDERLEZI RISING for the Cineplexx Distribution award. In the opinion of the jury, EDERLEZI RISING has the highest potential to be an international box office hit. Both actors deliver a great performance. The topics of artificial intelligence, the search of the world's population for a new place to inhabit as well as the special effects, including the VFX and futuristic look, are intriguing to us. The story is positive, modern and entertaining.

WINNER: THE STORY OF THE POLAR BEAR THAT WANTED TO GO TO AFRICA
Director: Mo Harawe

Award for the best short film within the LET'S CEE Talent Academy: