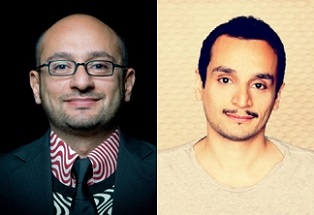 The curators of the Short Film Competition, Arash und Arman T. Riahi, about their selection this year:

Visitors of the LET'S CEE Film Festival are united in one thing: they get to sit together in the cinema halls and watch this year’s Short Film Competition (on the topic "Together or Apart" with free admission!). In general, one has the impression that differences count more than similarities. It is difficult to emphasise the common in a world based on differences. But it is possible and the cinema is a place where the common love for stories, images, and emotions continues to reign. In the cinema we can leave our differences behind – at least for the duration of a short film screening. This doesn't mean that we should bash each others heads after the screening. Cinema promotes our capacity for critical engagement and inspires our imagination – two important qualities that we feel are getting lost more and more nowadays.

A summer residence in ex-Yugoslavia serving up the best food every day, just in case Marshal Tito comes to visit (Éclair). The possibility of war in the middle of Europe, and the impossibility of living with it (The Best Fireworks Ever). Questioning old traditions because of a technical error during the wedding night (The Second Bullet). A stubborn teenage girl breaking with heteronormative structures and a feminist assault on religious patriarchy (Would You Look at Her). The world from the eyes of a child that is different from others (Hide and Seek). The return to the past, marked by uncertainty, but also by hope (Into the Blue). The imminent shattering of a close friendship (Dancing Girls). An unlikely reunion in a foreign land (The Story of the Polar Bear that Wanted to Go to Africa). A chance encounter with a stranger that makes one doubt their own past (The Hitcher). The choice between right and wrong, between being abandoned or following blindly (Forgive Me). A question of morality versus a question of money (Welcome). The opportunity of a fresh start for a rundown boxing Santa Claus (Knockdown). A mirrored elevator in which reality varies infinitely (Re- flections Full of Life). A quiet reflection on life and humanity on a lake (They Come from the Center of the World). Or the death of the brother which is inextricably linked to one's own destiny (I'm Staying). These are short films that are in no way inferior to feature length movies when it comes to evoking thoughts and making the public aware of their own shortcomings and weaknesses. For the survival of our community, nothing seems more important today than the ability to recognise and admit one's own mistakes, even if one runs the risk of being ridiculed. A good movie is like a good friend: it manages to expose us for who we are.

We wish you a great viewing experience!