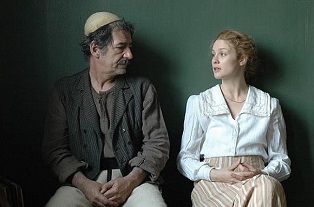 The year 2018 brings with it many commemoration days, for instance the 100th anniversary of the end of World War I. With the retrospective Women and War, LET’S CEE Film Festival presents, together with the Future Fonds of the Republic of Austria and the VHS Wiener Urania, a carefully composed selection of restored documentaries and feature films from the archive EFG1914 – including nine feature-length and short films. Most productions are pure cinematic curiosities and will be shown for the first time in Austria. The aim of the retrospective is to provide a sense of European history and the exchange of knowledge about it. As the title suggests, the focus is on the role of women in wartime. As such, the emphasis is not so much on women as victims, but rather as those who actively and combatively took part in the war and had an impact in their respective home countries, such as young Romanian Ecaterina Teodoriou whose story is told in two films – one made in 1931, the other in 1978.

Cofinanced by the EU and as a part of Europeana Network, European Film Gateway / EFG1914 is a digitalisation project that focuses on films and non-filmic material from World War I. The main result of the EFG project is the web portal www.europeanfilmgateway.eu, which, for the very first time, grants access to numerous films, photos, texts, and other material from European film archives. The project covers, among other things, newsreels, documentaries and feature films, as well as propaganda films. Moreover, EFG1914 provides access to anti-war-films that were mainly produced after 1918. This material is of particular importance as only a fifth of the silent film productions have survived in the respective film institutions.

Women and War will open on Saturday, the 14th of April in the Middle Hall of the VHS Wiener Urania where subsequent screenings for the retrospective will be held. To make the retrospective accessible to a broader public, especially to socially disadvantaged people, pupils and students, all screening and events will be free of charge. Four silent films (For You, Poland; Glory to Us, Death to the Enemy; The Heroine from Jiu; The Last Night) will be accompanied by Polish pianist and band leader Maciej Łyszkiewicz on piano. A panel discussion with female historians, sociologists, publicists, and women who are affected by past or current wars (such as Rwandan actress Eliane Umuhire, Turkish director Reyan Tuvi, and 89-year-old Holocaust survivor Helga Feldner-Busztin) will bring the programme full circle.

In what ways has the role of women in armed conflicts and war changed over time? Is the traditional gender-specific ascription of ideas such as security and protection to men and peace and stability to women still applicable in the 21st century? Are women better at maintaining peace or resolving conflict? How do education and society influence people’s understanding of their own role and abilities in dealing with violence? During the discussion “Women and War” a panel of female experts will attempt to answer these and other questions. Two films that are part of this year’s LET’S CEE programme will also be introduced. The discussion will be held in English.