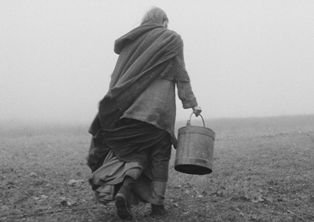 “If there is one film which is profoundly moving, inspiring and leaves clear marks, then it belongs to Béla Tarr’s oeuvre.” With these words, the German film historian Ulrich Gregor honoured the Hungarian grand master of directing in 2013, at the awarding of the Bremen Film Prize. The US-American film director Gus Van Sant once even called Tarr “one of the few visionary film makers”. Born in Pécsin 1955, as the son of a stage designer and a prompter, Tarr had already started to shoot amateur films by the age of 16. He soon gained attention of the Béla Balázs Film Studio, which funded his first feature film, Family Nest, in 1979. From 1988 on, he collaborated with the Hungarian writer Lászlo Krasznahorkai, who was supposed to write all his screenplays. A result of this co-operation is the over 7 hours long epic masterpiece Satan’s Tango,developed in 1994, which till this day is still listed as one of the best films of all time. A slow rhythm, a minimalistic form of presentation, and a small amount of long camera angles have become the trademarks of Tarr’s black and white films, who in this way points out the complex meaning of the shown conditions. In 2011, the existentialist parable The Turin Horse was released, which won the Silver Bear at the Berlinale and the Konrad Wolf Prize of the Academy of Arts in Berlin. Two years prior to this, the directing genius announced the end of his artistic careerwith this film. Tarr, who has been working as a guest lecturer at the German Film and Television Academy Berlin since 1990, started heading the Film Factory in Sarajevo in 2013, which he founded himself. In December, he tweeted he was going to leave the Bosnian capital. He has since been seen in Amsterdam, where he curated a big exhibition for the EYE Museum, known under the name of Till the End of the World, which turned out to be a mixture of film, theatre and installation, and for which he even created a shortfilm. Tarr says that everybody who wants to stay a world citizen in their thoughts needs a national identity. On 25th March, he will receive the Star of the Urania at the LET’S CEE Film Festival – the festival’s Lifetime Achievement Award.

Click here to buy tickets for "The Turin Horse"