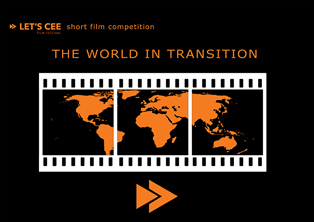 Film Talents, listen up: From 8 November 2016 to 15 January 2017, filmmakers are encouraged to submit their work to the LET’S CEE Short Film Competition 2017. Not only are there two attractive main prizes waiting to be won as well as the confidence of possibly having been among the higher ranks of an outstanding competition, but ten finalists will receive an invitation to Vienna and free participation in our new LET’S CEE Talent Academy.

Between 8 November and 15 January 2017, filmmakers up to the age of 35 from Central and Eastern Europe, the Caucasus region, Turkey and Austria will have the opportunity to submit their film contributions to the Short Film Competition of the LET’S CEE Film Festival 2017. Heads up, we’re expanding: For the very first time we shout out to filmmakers of all ages from other countries not mentioned above, asking them to send in topic related films as well. Be aware of the restrictions though: They can neither win our Short Film Competition’s main prize nor receive an invitation to Vienna due to our Festival’s thematic focus. Anyhow, the best contributions in this regard will be screened within the Short Films Special Programme at the LET’S CEE Film Festival 2017 for a simple reason: We keep getting great contributions from non-CEE filmmakers each year and, thus, decided not to keep them to ourselves and from the audience any longer. By the way: This is the reason why those contributions are still qualified for the Short Film Audience Award.

What else is there to know? As usual, submitted materials are not allowed to exceed the duration of 30 minutes. The submission form has to be filled in thoroughly with all relevant information. Due to the growing amount of submissions each year (500 only within the last edition) and the subsequently rising workload, a processing fee of 10 Euros per film will be charged as of now. You can find the detailed regulations HERE and HERE you can submit your film via Festhome or HERE via our Festival Management Software Eventival.

The theme of the Short Film Competition 2017 is: WORLD IN TRANSITION.

The worsening crisis of the international financial system and the rapidly growing consequences of climate change, the increasing global migration caused by poverty and war and the emerging of (right-wing) populists worldwide, an EU shaken to its foundations by the recent Brexit and threatened by constantly intensifying central problems, substantial upheavals in the job market and the excesses of hypercapitalism, species extinction and overpopulation, big data and surveillance state, hacker attacks and international terrorism: there are plenty of reasons to fear the unknown of the future. But are these fears justified? At lest one thing is clear: Change continues to replace habitual stability at a pace many people seem to regard as threatening. Sure enough, this “WORLD IN TRANSITION” doesn’t necessarily only cause risks, but create new opportunities and possibilities as well: the sensational progress in digitalisation and medicine as well as the energy revolution, to name a few. What about this huge trend of veganism or the penchant for saving resources? What about these individualistic tendencies nowadays? How is society supposed to handle these tremendous challenges of the presence and future? How is each individual supposed to deal with it? Is the situation hopeless or just serious, or does it simply mean we should encounter new challenges with courage and confidence? Or even humour? The competition’s theme can be implemented into the films in various ways. Interpersonal aspects, social, political, legal or cultural issues, you name it. In other words: everything is possible as long as it is a good piece of work/art and covers the topic.

An advisory board, chaired by the renowned film directors of Iranian descent Arash T. Riahi and Arman T. Riahi, both living in Austria, will determine high-potential films from the submitted works from the CEE region. The top ten will be running in the Short Film Competition while at least ten more will be presented out of competition. Further shorts, especially productions from non-CEE countries, will be screened in the Short Films Special Programme.

After the presentation of the participating productions during the Festival an international jury will announce the winner for the main prize of the Short Film Competition (1,500 Euros and the Urania figurine) at the Award Ceremony on 25 March 2017 at Urania Cinema. As mentioned in the beginning, each and every short film screened at the Festival will have the chance to receive the Audience Award with a value of 1,500 Euros in this category.

The filmmakers making it into the main Short Film Competition will, as a matter of course, benefit even beyond the above mentioned perks since one of the persons involved in the project will be invited to Vienna as a guest*) to present their work (at the expense of LET’S CEE and our partners). In addition, these ten filmmakers will get the exceptional opportunity to take part in our first LET’S CEE Talent Academy for free which covers both access to all LET’S CEE Master Classes and LET’S CEE Industry Days. What is more, 15 representatives of all further short films screened at the LET’S CEE Film Festival will get a free spot in the LET’S CEE Talent Academy. It goes without saying that Get Togethers will allow all invited filmmakers to establish contacts and networks with successful directors, producers, actors etc., as well as exchange experiences and form new ideas with fellow filmmakers. All of which while being highly encouraged to initiating new cooperations and projects.

Last but not least, we would like to emphasise the fact that a great deal of various media worldwide reported on our Short Film Competition’s winners and their work over the past years.

For the fourth time in a row, film producer and cultural manager Robert Hofferer and Artdeluxe Kunst- und Kulturmanagement GmbH are going to sponsor the prize in the main short film category. The LET’S CEE Film Festival’s official wine partner, LILIAC is going to donate the 1,500 Euros for the Audience Award in 2017.