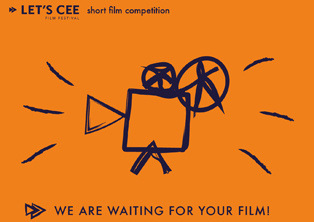 From May 3 until July 12, 2015, filmmakers up to the age of 35 years from Central and Eastern Europe as well as Austria have the possibility to submit their own films to the SHORT FILM COMPETITION of this year’s LET’S CEE Film Festival. The contributed works need to have a maximum length of 30 minutes.

The topic of the SHORT FILM COMPETITION 2015 is: All You Need Is Love!

We believe this sentence to be not less relevant nowadays than it was, when the Beatles enjoyed great success with their song of the same name in 1967 – quite the contrary. One cannot simply repeat those words often enough. We are talking about love in all forms and shapes. As in the previous years of course, the submitted films will be free examine the theme ‘love’ from all perspectives and angles. Great imagination and resourcefulness will be welcomed and free associations allowed. There are no restrictions regarding the content, except an unmistakably clear relation to the topic.

A board of curators chaired by the renowned film directors of Iranian descent Arash T. Riahi and Arman T. Riahi, who both live in Austria, will subsequently select the ten best films from the submitted material. Later on during the festival from October 1-11, 2015 an international panel of judges will choose the one director to receive the main prize of 1.500 Euros and a Urania statue.

But not only the winning films will benefit, since all top ten filmmakers will be invited to present their work at the LET’S CEE Film Festival in Vienna, where they can watch all FILMS screened in the frame of the festival and participate in various MASTER CLASSES for free. An extra incentive will be the opportunity to socialise with other established directors, actors etc. at GET TOGETHERS and to exchange experiences and ideas among each other, which is supposed to especially encourage the launch of new projects and collaborations.

Last not least, it should be noted that a great number of countries and various media reported about our SHORT FILM COMPETITION finalists and their work past year. Particular attention was then paid to the filmmaker Una Gunjak, born in Sarajevo and living in London, and her short film “The Chicken”, which was not only selected as best film by our jury, but only a few weeks later by the European Film Academy in the category of the best European Short Film at the 27th European Film Awards as well.