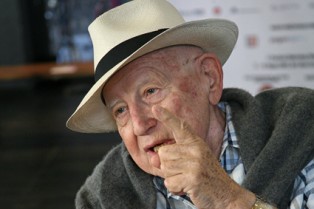 2014 is the centenary of the beginning of World War I and the 75th anniversary of World War II. Branko Lustig who had to witness the horrors of the Holocaust himself therefore curated a RETROSPECTIVE OF ANTI-WAR MOVIES for the LET’S CEE Film Festival, including SUNSHINE from the director István Szabó, who will be personally present at the event, Branko Bauer’s DON’T LOOK BACK, MY SON and Volker Schlöndorff’s THE TIN DRUM.

„About the right way of dealing with sustainable remembrance and commemoration“

The anti war series will be continued with an Educational Morning the next day.

Branko Lustig, who was interned in the concentration camps Auschwitz and Bergen-Belsen during his childhood because of his Jewish origin, will come to Vienna within the framework of a series of events called EDUCATIONAL MORNING throughout Europe for the very first time. The multidisciplinary series, which will be consisting of the film screening of RUN BOY RUN (Germany/France/Poland 2013, German language version, 112 min, released for audiences as of 12 years of age) followed by a panel discussion, is aimed at sensitizing young people to the topic of the Holocaust. Students get the unique opportunity to discuss with Branko Lustig after the movie.

The program EDUCATIONAL MORNING was founded by Branko Lustig with the explicitly phrased, central goal to clearly and unequivocally stand against the increasing popularity of right-wing extremist ideologies with the help of interdisciplinary methods and multimedia. Needless to say, this position is also a clear sign against the rise of violence among young people and the increased discrimination of people with different ethnicity, religion or skin colour and it strongly speaks out against social injustice.

The event will take place at Artis Kino, Schultergasse 5, 1010 Vienna on Monday, 06 Oct. 2014, 09:00. The screening will be immediately followed by the discussion with Branko Lustig in German. Free entrance for schools, seats are limited.

In cooperation with the Festival of Tolerance: