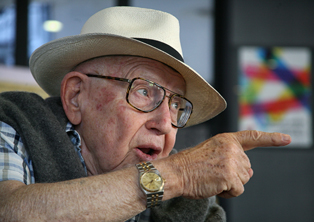 Branko Lustig was born in 1932 in Osijek, Croatia, which then belonged to the Kingdom of Yugoslavia. Due to his Jewish origins, he was interned in the concentration camps Auschwitz and Bergen-Belsen, while many members of his family were murdered during the Holocaust. He owes his survival to a German officer who was also from Osijek and used to know Lustig’s father.

He started his filming career in 1955 as an assistant director at the state-owned production company Jadran Film. Only one year later he was the lead producer of the war drama Don’t Look Back Son, which was awarded three Golden Arenas at the Pula Film Festival, Croatia’s oldest film festival. Several productions such as Mit Karl May im Orient (1963) or Anno Domini 1573 (1975) also featured Lustig as an actor back then. During the eighties he returned his focus to working on various film and TV productions such as the TV series The Winds of War (1983) and War and Remembrance (1988) before emigrating to the United States in 1988. In 1994 he founded together with Steven Spielberg the Shoah Foundation, the largest multi-media collection of time testimonies of Holocaust survivors worldwide. One year later he won an Academy Award and a Golden Globe as one of the producers of Schindler’s List – a performance which he repeated in 2001, having produced Gladiator.

That makes Branko Lustig the only Croat to have won two Oscars. Several of his other Hollywood productions won awards too – The Peacemaker (1997), Black Hawk Down (2001), Kingdom of Heaven (2005), A Good Year (2006) and American Gangster (2007). In 2010 Branko Lustig received an honorary doctorate from the University of Zagreb and became an honorary citizen of his home town Osijek. He also founded the production company Six Point Films with Phil Blazer in Los Angeles in 2008. In that year he also became the honorary director of the Zagreb Jewish Film Festival.

In 2011, at the age of 78, Branko Lustig travelled to Auschwitz to celebrate his Bar Mitzvah at the very place at which he had not been able to celebrate it when he was 13 years old.