Daliborek is an unpleasant citizen from a small Moravian town. He is a painter in a factory, amateur horror filmmaker, composer of angry songs, and radical neo-Nazi. Although he is approaching his forties, he still lives with his mother. Besides hating his job, he also hates Roma, Jews, refugees, homosexuals and Angela Merkel. From all these things, he loathes his life the most, but can’t seem to find a way to change it. Only when his mother meets a new man, whose political views are even more extreme than Daliborek’s, things start to change and he also, for the very first time, decides to look for a girlfriend. Director Vít Klusák engages in a tricky and risky experiment by giving these people a platform where they can loudly and roughly show themselves as “proper Czechs” who miss Hitler. Lots of scenes are indeed taken from real life and are re-enacted by real people. And yet Vít Klusák, who idolises the exemplary work of Ulrich Seidel and Jacques Tati, manages to give his protagonists an almost human side. Ultimately, they can be seen as the failure of a system that pits people against each other, instead of conveying values such as solidarity or humanity. 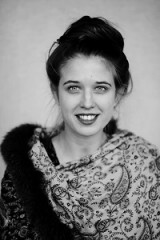 Script Author and Set-Designer The White World According to Daliborek
In Vienna: April 14-15

The White World According to Daliborek