Marko and Benny, two Viennese residents with so-called “migration background” are integrated so well that they’re barely perceived as foreign anymore – if it wasn’t for Benny’s black hair. In Rudolfsgrund, an ethnically mixed suburban quarter, they are approached by ambitious TV editor Marlene Weizenhuber, who is looking for protagonists for her TV documentary series. Marko and Benny quickly pretend to be small-time criminals and hard-boiled migrants in order to be cast for the series and make some money. To conceal their lie, they create a second identity consisting of clichés and stereotypes. While turning the show into big hype by fulfilling all those prejudices and expectations, the duo must deal with real fates of integration for the first time in their lives – including their own. Arman T. Riahi’s pleasurable hit comedy skilfully plays on the clichés of migration background and integration with the help of two exemplary foreigners who are so “Austrian” that it’s almost conspicuous. The meeting of these two men and an aspiring reporter in search of a controversial TV hit builds an excellent foundation for a film that questions all of the above-named issues in a way that is not too politically correct.

Thanks to the support of the LET'S CEE Partner Audio2 | Datamatix the screening will be accompanied by audio description. 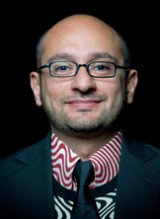