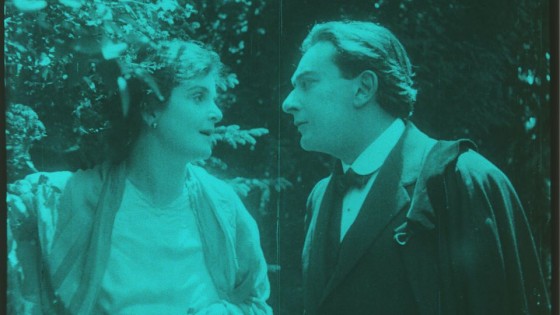 Gitta, a former actress, leaves her husband and her little son and elopes with a lustful and thoroughly unworthy actor. The two end up in Russia, where Gitta becomes a prominent cabaret singer. A Russian colonel falls in love with her. The actor, a notorious gambler, pays his debts by not only selling of Gitta’s jewellery, but eventually even selling Gitta to the colonel himself. However, the colonel is a man of honour and helps the woman return to Hungary. But back home, Gitta has to realise that her husband has died and her son has disappeared. She becomes an actress again, and one day she is visited by a young admirer in her dressing room. The film was produced in 1917 in the then still Hungarian Kolozsvár (now Cluj-Napoca) in Transylvania. Kolozsvár was the thriving centre of a small Hungarian film industry for a few years. The film was considered lost, but a copy was discovered in a Berlin archive, under the German title Roman einer Schauspielerin (Novel of an Actress). It was restored and first shown in 2002 at the silent film festival in Pordenone. The Last Night is one of only two films preserved from the work of the busy theatre maker, film producer and director Jenő Janovics.