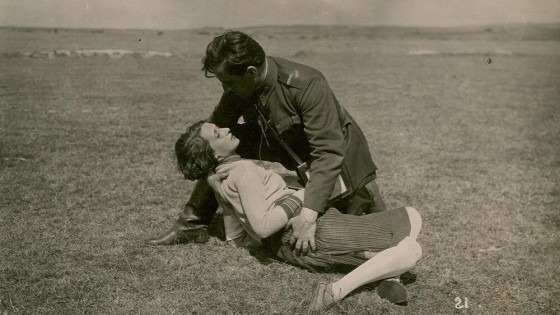 Ion Niculescu-Brună’s film, of which only 42 minutes have survived, tells the story of Ecaterina Teodoroiu, the first female soldier in Romania during the First World War. When the nurse finds out that her brother Nicolae has fallen in battle against the Central Powers and her childhood friend Mares is injured, she insists on being allowed to take part in the combat. She is wounded, but personally awarded a medal by the Queen for her bravery and appointed to be a corporal. On 3 September 1917, Ecaterina falls in the defence of the city Târgu Jiu, where she was buried and a monument was built in her honour. The film premiered on 8 January 1931 in the Bucharest Cinema “Femina” as part of a gala in the presence of the entire royal family, the government, the diplomatic corps and the highest state officials. The film was initially without dialogues, but with “music and effects”, as it was called in the press, especially with battle noises. In addition to the game scenes, it also contains newsreel footage from the Ministry of War archive, such as sequences from the front and the visit of Queen Marie in a military hospital. The Romanian national heroine is played by Felicia Frunză. In addition to professional actors, director Niculescu-Brună also used real people who had fought in the war.

The Heroine from Jiu