Baba Prisa, grandmother and the family’s matriarch, lives in the restricted zone around Chernobyl with her constantly ill daughter Slava and her grandchild Vova. Prisa talks to mysterious water nymphs, the so-called “rusalki”. She sees and hears “stalker” (Andrei Tarkovsky sends his greetings), lives on psychoactive mushrooms and claims to have personally killed twelve SS-men during World War II. It is a strange world in which myth and reality blend, so that it’s difficult to tell where the one thing ends and where the other might begin. In the end, it’s not even surprising anymore that there is an underground station right beneath the family’s house in the woods. Then one day, when Baba Prisa receives a mystical warning about an upcoming disaster, an end is put to the placid lives of the three hermits. Volodymyr Tykhyys’ film, which is based on a play by Pavlo Arie, is a lot of things: a black comedy, an apocalyptical fairy tale with scifi and fantasy elements, but most of all, it is a rampant allegory on Ukraine’s past and present in which the Chernobyl accident of 1986 and the authorities’ insufficient measures are obviously still of concern. 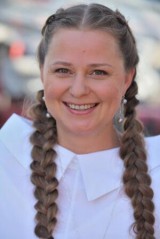 Actress The Gateway
In Vienna: April 14-16