Quite often, a touching love story is the central theme of a film. In this case, however, the arrangement of how the story unfolds is special. The lovers are Ingeborg Bachmann and Paul Celan, both important representatives of German-language poetry after 1945. The relationship between the Austrian poetess and the Jewish poet from Ukrainian Chernivtsi is told on the basis of their almost 20 years’ correspondence between 1948 and 1967. Ruth Beckermann chooses an unusual and almost documentary form of presentation: a young woman and a young man  read the letters in one of the studios of the national broadcasting station, Funkhaus Wien. One can hear longing, accusations, doubts, closeness and strangeness, about separations and long periods of silence. One can feel the struggle for words. And one can see the effects of all this in the readers’ faces. Not only the text, but also its impact is enacted – and occasionally discussed. The intensity of this relationship drama comes from its fascinating language, the  presence of the actors, and by camerawork and montage which dissolve the dialogue with changing perspectives and varying shot length. Talks during cigarette breaks, in the stairway and in the canteen, point to the present. The story, stronger than love, however, never vanishes out of sight.

Director and Writer The Dreamed Ones
In Vienna: April 14 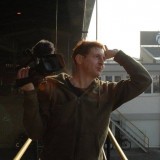 Cinematographer The Dreamed Ones
In Vienna: 19. and 20. April