Totila “Toto” Blumen is a Holocaust researcher. That is why he simply can’t take a joke, even less so when his colleagues try to turn a congress about Auschwitz into an ad-funded media event. In Toto’s eyes, this means disregarding the legacy of his very much worshipped Professor Norkus, who has recently passed away. When the misanthrope gets paired up with Zazie, an obnoxious French student who works for him as an intern and has an affair with his boss, he becomes even more desperate. But complaining does not get him anywhere, especially not with his wife, who advises him to accept his fate and to take life as it comes. Therefore, Toto keeps on working while Zazie is trying to support him. However, she seems to have her own agenda herself – one that is entangled to Toto’s background and his well-protected family secret. For many years, Chris Kraus has been investigating his own family history and involvement with the Nazis in the research centre in Ludwigsburg which is also where the film is set. His cinematic approach to this delicate subject impresses with an amazing easiness and some daring, but efficient humour. 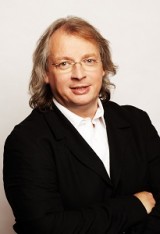 Producer The Bloom of Yesterday
In Vienna: April 13

The Bloom of Yesterday