The Polish documentary filmmaker Marta Prus, who practiced rhythmic gymnastics in her youth and later became a dancer, portrayed the Russian top athlete Margarita Mamun. After many difficulties and bureaucratic obstacles, the filmmaker received the permission to shoot in the hermetically sealed training center in Novogorsk. “You’re not human, you’re an athlete”, says one of the coaches of 20-year-old Rita, who is preparing to represent her country in Rhythmic Gymnastics at the 2016 Rio de Janeiro Olympics, in a merciless way. The training is brutal, especially in mental terms. No matter how graceful Rita catches her rings or rolls a ball over her shoulder, the coaches expect more from her, repeatedly. Only in her spare time when she talks to her boyfriend via Skype or is with her parents, she finds warmth and comfort. The film illustrates how the Russian training system crosses barriers. It also documents Rita’s psychological condition: she seems to be constantly on the verge of bursting into tears. The subtle montage and the efficient sound design allow us to feel her despair, pain and the tremendous pressure she is living with. The film’s end appears like a relieving liberation. 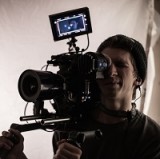 Cinematographer Over The Limit
In Vienna: April 14-15