It’s 1992 in Lithuania. Irena is a manager of a state-owned pig breeding farm, which has faced grave difficulties in the wake of the country’s abrupt political changes from communism to socialism. Just as it seemed that the farm would have to close, in comes a good looking, American-born Lithuanian by the name of Bernardas, who believes that the farm once belonged to his parents. He buys the farm on the spot and promises nothing less than to save the troubled business. Even though Irena seems to gradually give in to the mysterious yet vociferous stranger’s charm, she doesn’t forget that his intentions might not be as selfless as he leads on. Eventually Bernardas caves in and reveals to her that his parents hid a treasure somewhere on the farm shortly before they fled, spurring on the both of them to search for it. In her comedy film, Eglė Vertelytė, a young director with dry humour and an eye for the absurd, puts emphasis on a political development which, according to her, can still be strongly felt today. The country is split in two: on the one hand, there are the people that turned out to be seemingly versatile, and on the other hand, there are those who missed the chance to jump on the train to financial success. 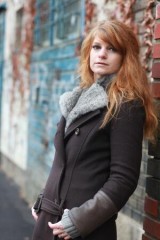 Pay as you can