Janez Burger’s feature film debut starts by praising nihilism, apathy and lethargy. Dizzy breaks the fourth wall with his dialogue. He is not a very hard-working student and rather enjoys living his life on the university’s campus. The 30-year-old’s daily routine consists of drinking, sleeping, and watching TV. Then, there is Evica, who seems to be in love with Dizzy without him realising it. Dizzy’s comfortable routine gets disrupted when Marko, a first-year student, becomes his roommate. Dizzy calls his girlfriend Marina to plan a weekend with her, but she does not show up. Meanwhile, Marko is reorganising Dizzy’s life. He brings his girlfriend Ana with him who turns out to be pregnant. Dizzy, Marko and Ana slowly get closer. During a picnic, Ana goes into labour and Dizzy finally makes a choice in his life. Janez Burger’s bittersweet black and white comedy about student life was a great festival success at that time. The director describes his protagonist as someone who “is stranded halfway on his journey to adulthood”.

Director and Writer Idle Running and Ivan
In Vienna: April 18-19 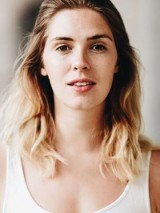