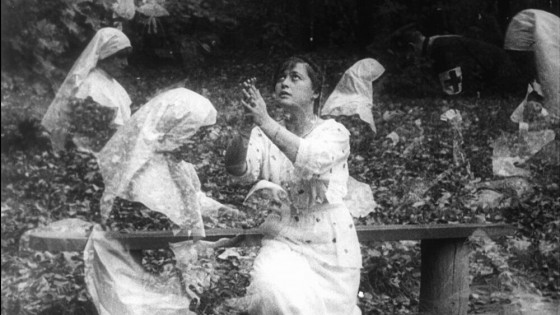 Yevgeni Franzevich Bauer, originally of Bohemian descent, was one of the most important directors of pre-revolutionary Russia and decisively influenced the subsequent high-quality filmmaking of the country. Thus, for example, the brilliant later director Lev Kuleshov worked as a set designer for Bauer. This short war propaganda film, made in 1914 – the same year as his social drama Silent Witnesses – is barely known these days, but it shows Bauer’s excellent qualities as a director. The title Glory to Us, Death to the Enemy sounds very martial, but in fact Bauer treats the heroic theme rather ironically. It’s about a young war bride, whose husband was sent to the front. She herself decides to work as a nurse and to serve the patriotic cause. The interesting and unusual thing about the short film is that the events are shown almost entirely from her perspective, that of a woman. The war is portrayed as terrible, with all the sadness and suffering it causes. The nurse has to ward off the assault of a soldier who tries to rape her. She wounds him and then puts on his uniform to carry out the important mission he was assigned to do.

Glory to Us, Death to the Enemy