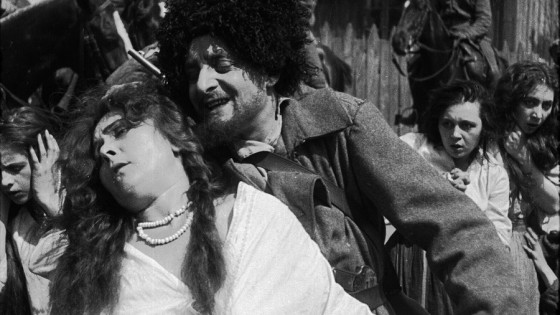 This patriotic Polish silent film, which was digitalised in 2011, is an absolute rarity. It tells the love story of two young adults, Franek and Hanka. Their love is put to the test during the Polish-Soviet War from 1919 to 1921. Despite defending their home country, they stay true to their feelings and ultimately their commitment is eventually rewarded. Antoni Bednarczyk’s movie originally consisted of seven acts. The nitrate film, which was finally used for the digital restoration of the movie, is 872 metres long, as stated by the Polish film scholar Małgorzata Hendrykowska – that’s less than half of the original length. According to Hendrykowska, the missing content is supplemented with the help of intertitles that are as economically used as possible. Noticeable are the battle scenes, which are amazingly realistic and brutal and denounce the attacks of the Bolsheviks on the Polish civilian population. Documentary footage, such as the occupation of the Lithuanian capital Vilnius, is also used. The main roles in For You, Poland are played by Jadwiga Doliwa, a non-professional actress, and Henryk Rydzewski, a nearly forgotten actor.