Falling is the story of two young people in post-revolutionary Ukraine. The country has been in an unspoken state of war ever since the protests. Anton, a former musical prodigywho could not handle his own talent, comes back to his grandfather after a long time in rehab for drug abuse. Katya, who lives on the outskirts of Kiev, on the other hand, is about to leave Ukraine with her boyfriend, a German photographer. As Anton and Katya meet by chance, their instant spark gives birth to something which both of them have been missing: for a short time, they feel warm and at home. Director Marina Stephanska explained that the actual plot is not as important as the feelings of her whole generation, which she tried to convey in her cinematographic debut: they – as well as the filmmaker herself – had been deeply unhinged by the events at Euromaidan in 2013, as well as by the changes in politics and in the Ukrainian society that followed. Suddenly, not only the future, but also the present were uncertain. It’s this feeling of uncertainty and sudden homelessness that makes this sensible and smart film so remarkable. On a side note, the spectacular images are filmed by Austrian camera operator Sebastian Thaler. 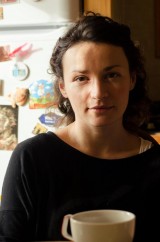