Anastasiya Miroshnichenko’s documentary addresses an extraordinary subject: with permission from the ministry of internal affairs, she shot her piece in a women’s prison in the Belarusian town of Gomel, where 1,500 inmates are currently imprisoned for committing crimes of various degrees. However, the film doesn’t focus on everyday life in prison, even though the tiring controls and routine procedures are well documented. Instead, Miroshnichenko seized the extraordinary opportunity to film a small number of inmates breaking out of their daily lives, at least for a while. The film tells the story of eleven incarcerated women, who volunteered for a theatre project. Whether to break out of their routine in prison, to undergo some sort of therapeutic treatment or to prepare themselves for the time after their release from jail by role-play, each partook in the project for their own reason. Miroshnichenko uses different methods to get close to the prisoners, conducting personal interviews which served to tell the individual fates of the women, many of which are mothers. Images from security cameras let the viewer feel the permanent surveillance the inmates are under. Scenes from the theatre rehearsals and the final performance show how much joy the women got out of this change in routine, and how eagerly they worked for it. Debut is a moving piece from a seemingly distant world. 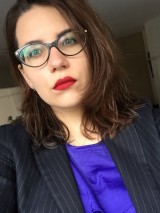