The graphic designer Alan has a very successful career, but he can’t say the same about his personal relationships – neither his romantic ones, nor the one with his father, the hedonistic painter Bruno. They’ve never got along since Bruno left Alan’s mother a long time ago. After a failed attempt to win back his ex-girlfriend, Alan travels to the Croatian island of Vis. There, he finds himself being torn between his eccentric father, another old flame and her fiancé. He decides to take initiative and in doing so finally manages to gain a new perspective on his life. The secret star of the film is the scenic backdrop: Comic Sans is already the forth film director Nevio Marasović sets up on the island. He says shooting on Vis is always wonderful but he thinks he will change location for future projects. Addressing the film Mamma Mia 2, which was also filmed on this island, he is hoping that Vis won’t change that much, even though a big Hollywood production like this attracts many tourists. If everybody visits this “untouched pearl of the Adria”, it won’t be a pearl any longer. 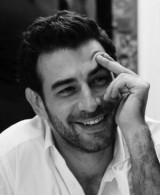