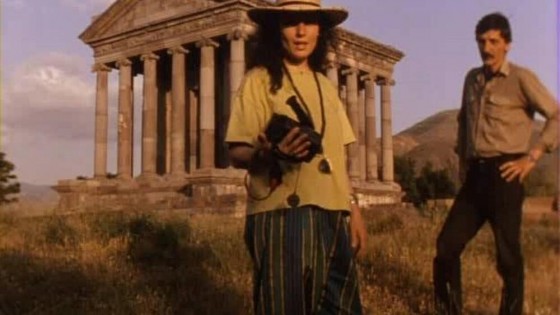 A Canadian photographer of Armenian descent travels with his wife to Armenia in order take twelve pictures of historically significant churches for a calendar. A tourist guide accompanies them along the way, through wild and romantic mountain landscapes. Back home the photographer looks at the memories recorded on video, which have become a chronicle of the increasing alienation from his wife, who apparently stayed with the guide in Armenia. Over the following year he tries to write letters to his wife. For this purpose he ritually invites a different woman to dinner each month, because to him the presence of these “guests” and the sound of foreign voices are inspiring. The great Canadian filmmaker Atom Egoyan, who was nominated for two Oscars in 1998 for his feature film The Sweet Hereafter, shot this part documentary, part fictional film in 1993. According to him the metaphor of separation in Calendar is supposed to emphasise the questionable nature of national affiliation. Given that the Armenian people love their churches, the photographer takes pictures that on the one hand are intended to serve the formation of national identity and at the same time attest the collapse of the relationship with his wife as well as their shared experience in their ancestors’ homeland.