Lora lives in a quaint, idyllic mountain village in Bulgaria. The 17-year-old girl, however, longs to leave her tradition-steeped surroundings. She feels trapped, and willfully isolates herself from the other village inhabitants through her behaviour. She smokes and wears different clothes to provoke intentionally. The only thing that Lora treasures in life is the love of her boyfriend Todor. Lora’s father, however, cannot approve of the relationship and her lifestyle, and commands his daughter to change her outlook on life. After her father’s death, her relatives and neighbours pressure the young woman to mourn, until Lora decides to emancipate herself completely, and to go her own way. Zhaleika, which was presented at the Berlinale 2016 and praised by the Generation 14plus jury, is a quiet coming-of-age story that presents a realistic and intimate insight into the young protagonist’s life. Lora painting her grandmother’s fingernails black is just one of the many scenes, where Director Eliza Petkova emphasises not only on the verbal aspects of the film, but also the physicality of the actors. Nonverbal expression and gestures are thus as strong as their oral counterparts, making it probable for the film to be understood even without subtitles. 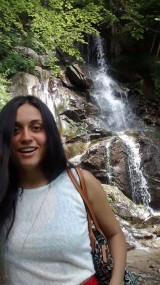