A family of three reside together under the same roof – and yet they live almost as if they inhabit parallel universes. While the mother works in a hospital and the father is often away for days on end working as a stuntman, the daughter spends the most of her time alone at home. An old love returns, a colleague dies, and the web of white lies and manipulation, of speechlessness and isolation becomes denser and more impenetrable. After an incident in a police station, the mother decides to bring her family back together before it completely disintegrates. But she is put to a tough test: Each attempt to get closer to her husband and daughter makes it clearer that years of poor communication have left behind even deeper divides than she thought. It emerges that each family member is looking for understanding and yearning for affection and love. But none of the three knows how to escape their loneliness. Lina Lužytė’s emotionally powerful feature film debut is a compelling Lithuanian family drama, while also being the portrait of a woman who is willing to push herself to her limits for a functional family. 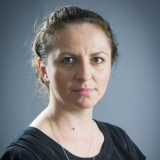 Iuliana Tarnovetchi
Producer Eastern Business, Toegether For Ever, Ana is coming back
In Vienna: March 21-25

Lina Lužytė
Director Together For Ever
In Vienna: March 24-26