This documentary with its striking images takes us to the region of Lattgalen at the Eastern border of the European Union. Director Viestur Kairish portrays the inhabitants of a village in Latvia and their unique daily routine mostly shaped by religious rituals, poverty and parochialism. St. Mary's procession, Sunday mass or funeral banquet: the people in his film – Russian Orthodox Christians, who had to flee their original homes – always appear somehow distant, introverted and lonely, even when in company. Or rather - to be more precise - “as lonely as a pelican in the desert”. The title of the documentary refers to a metaphor from a Jewish legend, according to which a mother pelican feeds her hungry young with her own blood. Apropos: in former times, up to 90 per cent of the population in some towns of this region were Jewish.

In his film, Kairish takes a very personal and at the same time poetical look at the scenery, the people and the life in his home country. Simultaneously, he provides the audience with an opportunity to compare the everyday lives of the people living there with their own situation, their own values and rites. But above all, Pelican in the Desert is a film about the imminent disappearance of an entire culture or civilisation.

Director Pelican in the Desert 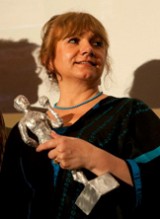 Pelican in the Desert