Bronisława Wajs, a Romani, has been confronted with prejudices and social restraints within the Polish society most of her life. Besides, from childhood on, she has always had struggles within her clan because of the mere fact that she was a woman: she was not allowed to go to school, even though she badly wanted to. Thus, in order to be able to write her poems, she taught herself to read and write. In 1949, while trapped in an arranged marriage, she meets the Polish writer and scientist Jerzy Ficowski. He recognises her big talent and publishes her work not only in the original language, but also in Polish. By taking the artistic path, Papusza (which is Romani for doll and also Wajs’ Romani name) questions the traditional female role model within the Romani community and is thus ostracised by her own family and excluded from her ethnical group.

By means of impressive black-and-white aesthetics, the movie tells the true story of the one and only Romani poetess’s tragic destiny. Supported by thrilling traditional music and outstanding dialogues in Romani, the movie further considers itself as an attempt to impart some of the Romani culture in order to restore a piece of the ethnic group’s dignity. 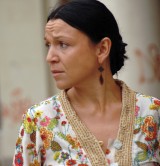 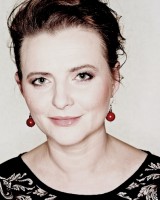